2016 was a restless, restless winter. Change was in the air.

For years, our family had been living in a house and a neighbourhood we loved, in a city we didn’t. Although we talked about moving some day, we didn’t anticipate doing so for several years. Even then, we assumed we’d stay safe and secure in the GTA, where we’d been raised and lived our whole lives. 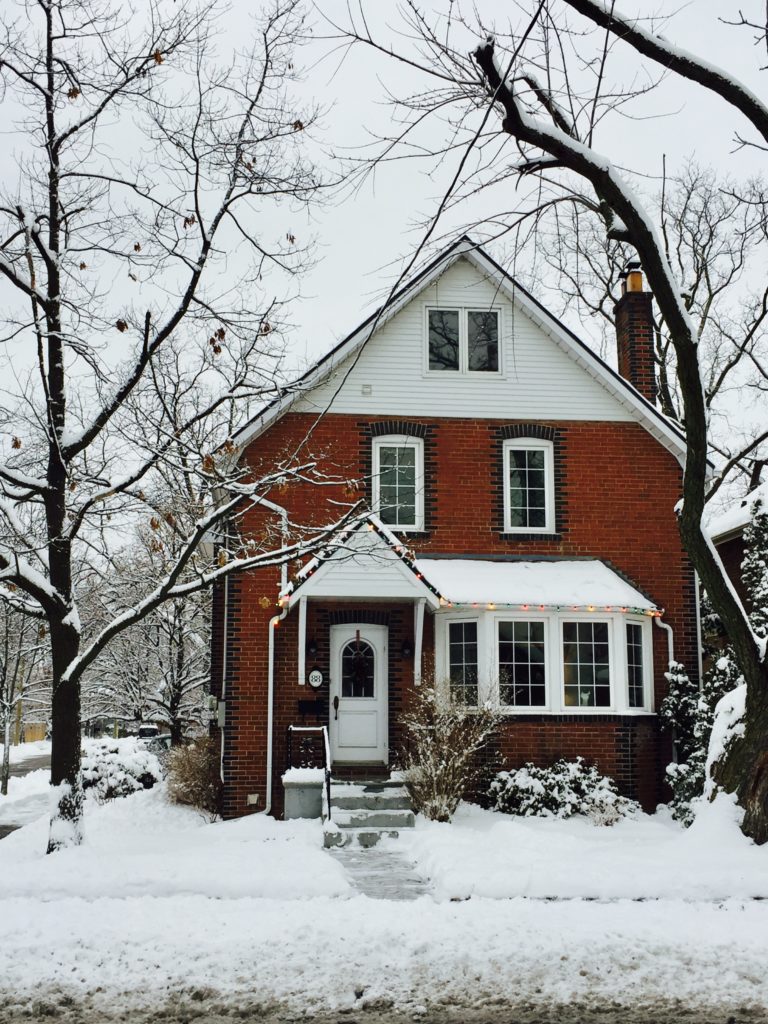 But the personal and professional dynamics in our lives were changing and could no longer be relied upon. At some point, our life/work balance had gone askew, leaving us increasingly frustrated and powerless. Trevor & I knew we needed to take back the direction of our future; I could feel the foundation of our lives shifting under our feet, but didn’t know yet where the momentum was going to take us. We talked a lot about how to build a life with more room for our passions and talents, as a better example for our son. We were redefining our goals as individuals and as a family. 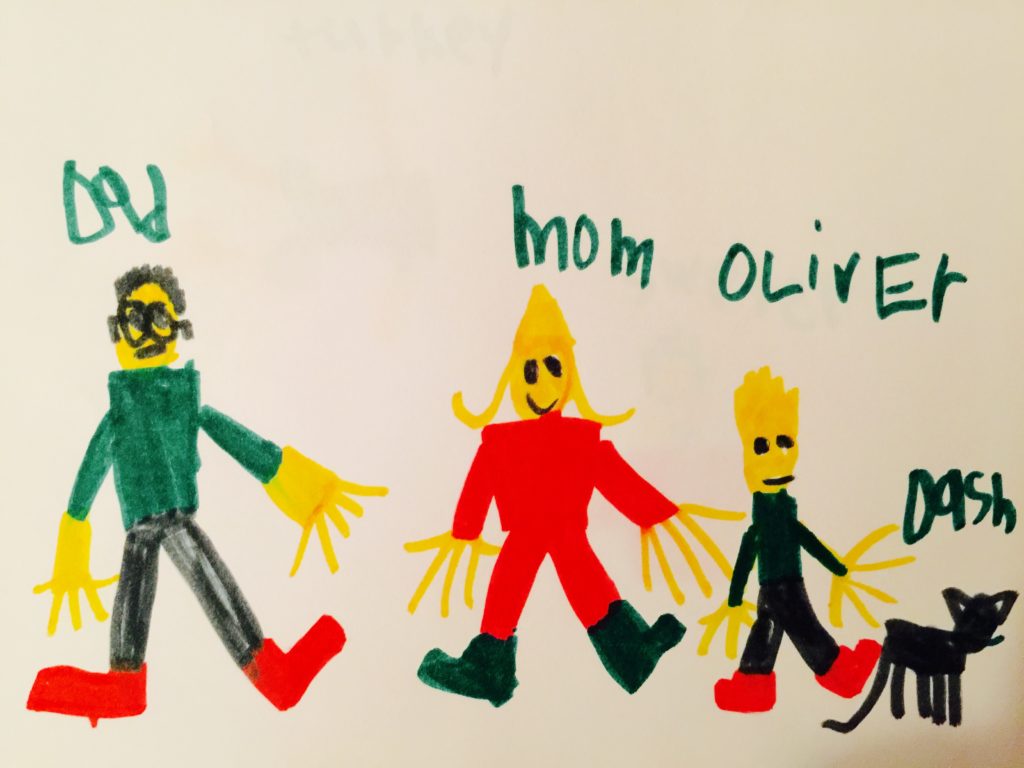 Meanwhile, I had not forgotten the house I saw on-line, back in September. (See Part 1.)  It had come to represent a kind of touchstone for me. In February, I went back to the real estate listing and it was still active. I emailed it to Trevor again. I was already referring to it as “my” house.

After viewing the listing – again – Trevor wrote back to say he thought this house might be the same one that we saw on the hill back in November, across from the mill. I was taken aback at the suggestion. No way… it couldn’t be the same house. Could it?

A quick search (thank you, ye gods of Google) revealed that it was in fact the same house. It looked quite different from the front than it did from the back, especially at a distance. 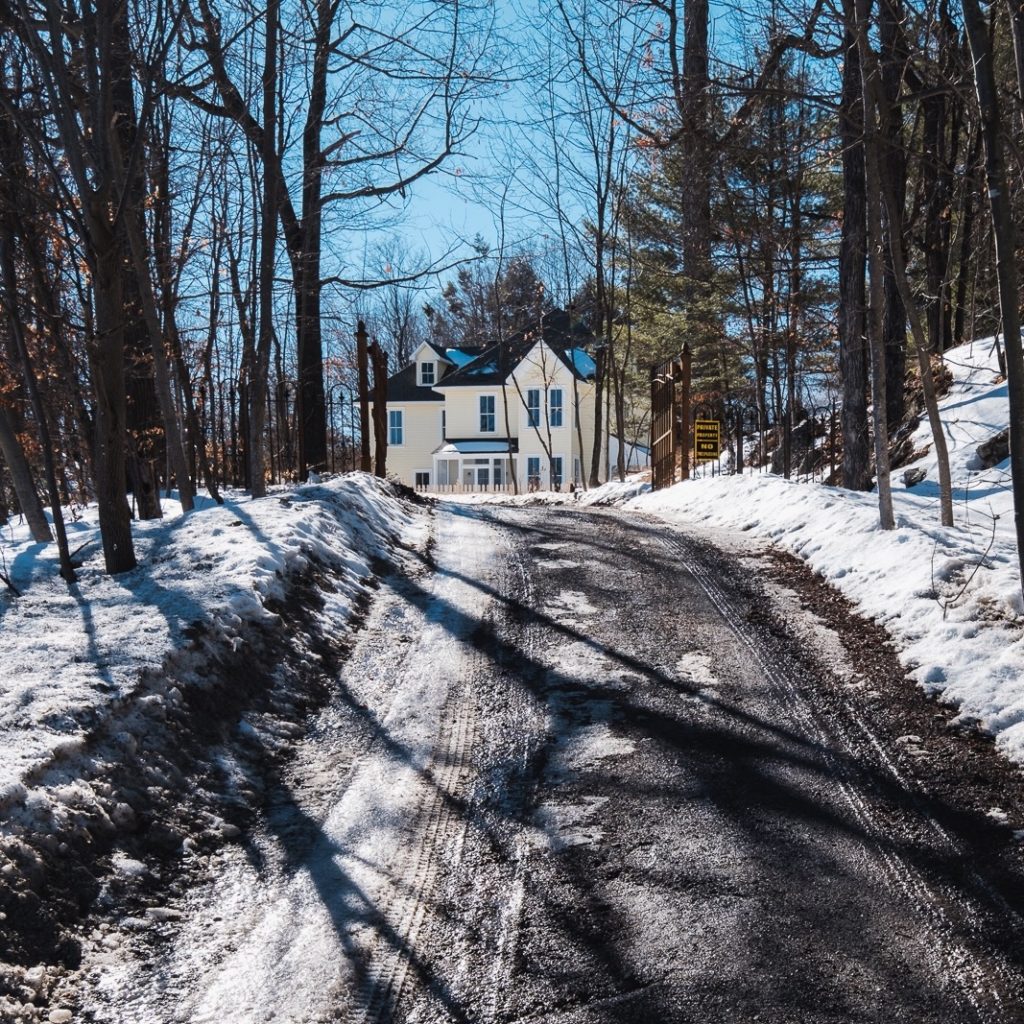 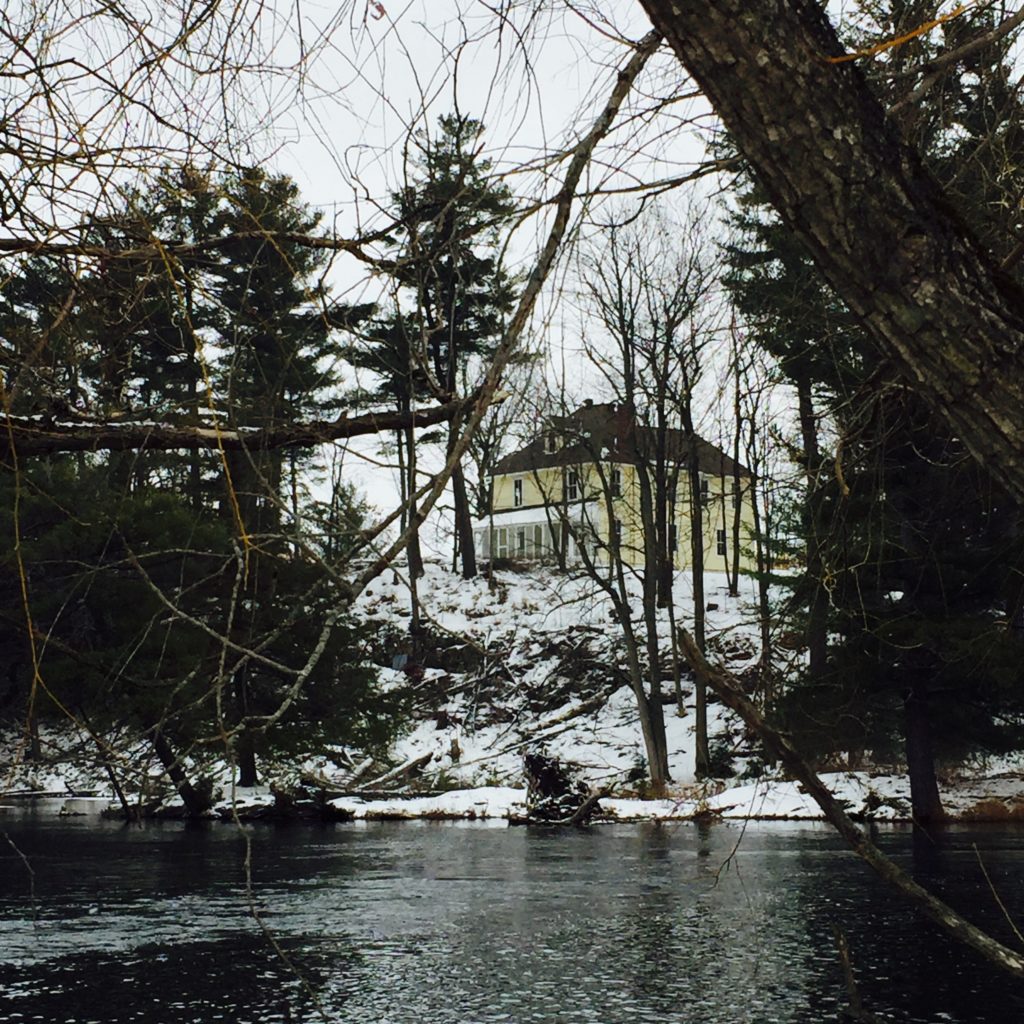 What were the odds? Trevor & I had essentially both discovered the same property at the same time, but in completely different ways. I felt this was significant, but what did it all mean?

I decided I needed to visit the house, myself. I felt an attachment to it that I couldn’t explain. I thought if I could at least see it in person, one of two things might happen:

1)  The house would be so amazing, Trevor would immediately be persuaded to say, “Yes, my love, we must purchase this magnificent dwelling and move in forthwith,”

2)  I might gain satisfaction enough to let it go.

Not being a character in a Merchant-Ivory film, Trevor doesn’t use terms like, “magnificent dwelling,” or “forthwith,” so the second option was really the best that I could hope for.

I contacted the realtor, who agreed to take me through the house. She sent me information about the property:  it was called Tett House, it came with six acres, and together with Bedford Mills, was of local historic significance. Of course, this only made me love it more.

In March, I made the 3-1/2 hour drive out to Bedford Mills. Seeing the home in person was like a dream. Some attractive but superficial renovations had been done to the interior (new kitchen, new bathroom) but it was relatively raw and untouched – neglected almost. The owners at that time didn’t live on the property, so there were no appliances and little furniture. It was a lonely old place. I could feel its sadness. But also its potential.

The shingles were flaking off the roof. The floors were strong, but in rough shape. The doors were beautiful, cinnamon-stained wood, with incredible antique hardware, but a century of changing seasons had left them warped and sticking in their frames. 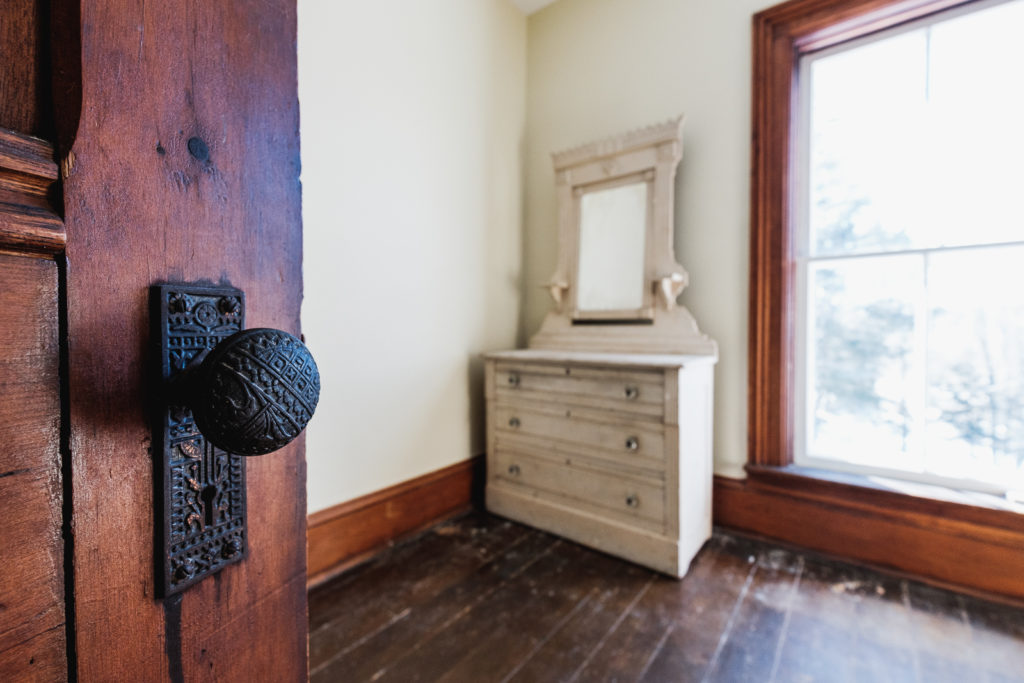 The house was filled with original, 19th century carpentry:  jam cupboards, shelves, and there was a walk-in linen closet upstairs in the servant’s quarters. Servant’s quarters!!  A “secret staircase” led from the kitchen to the second floor. How much had I always wanted a secret staircase? (Answer:  a lot.) 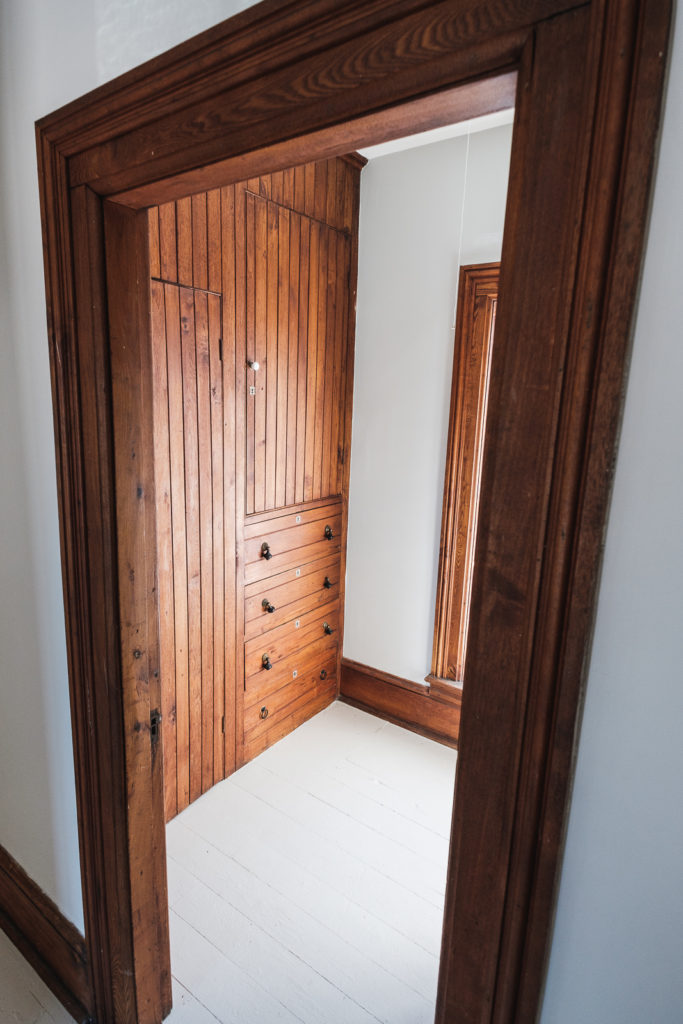 The fireplaces had gorgeous mantles, but were rusty and non-functioning. 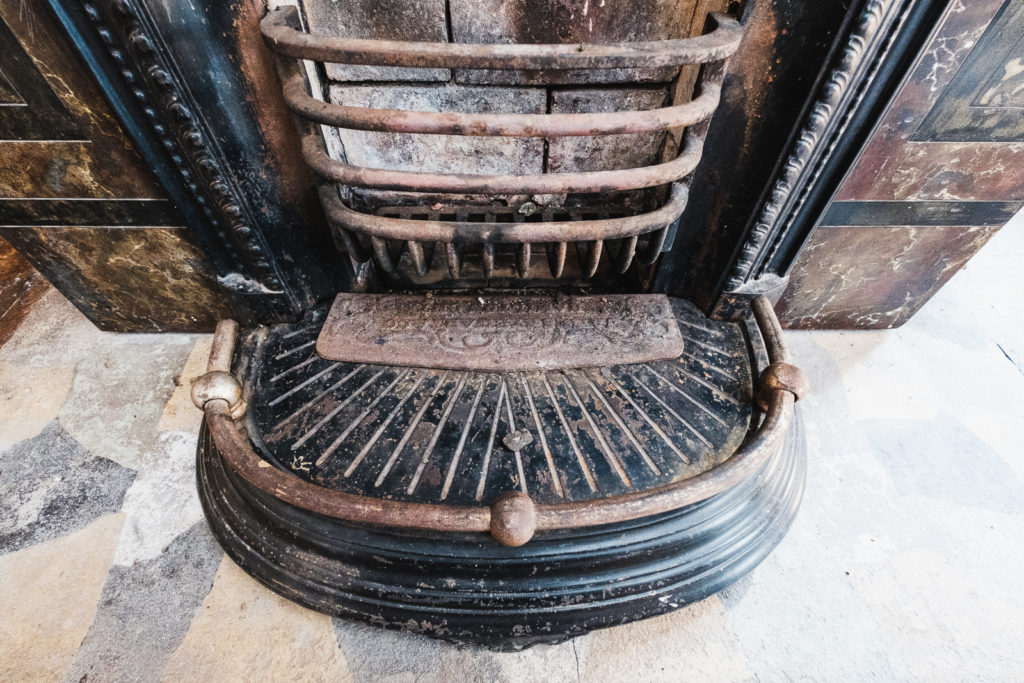 The basement was creepy…  it had a fieldstone foundation and a dirt-floor with a tired oil furnace. 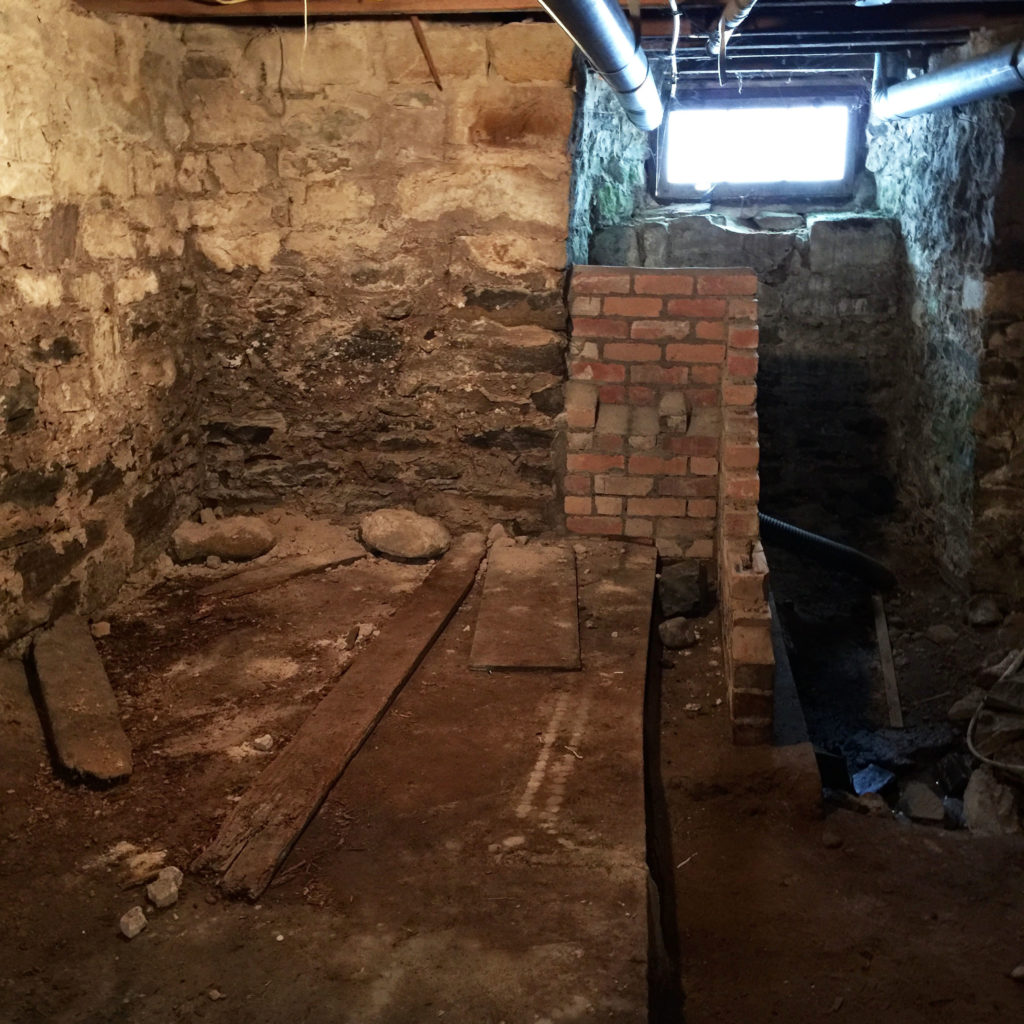 The original windows featured waves of rippled glass; they opened reluctantly, a number of the panes were cracked, and they were full of flies. Some of the rooms had been papered with ugly wallpaper that had begun to peel from the plaster walls, and in the main hallway, there was actually a hole in the floor from an old stovepipe. 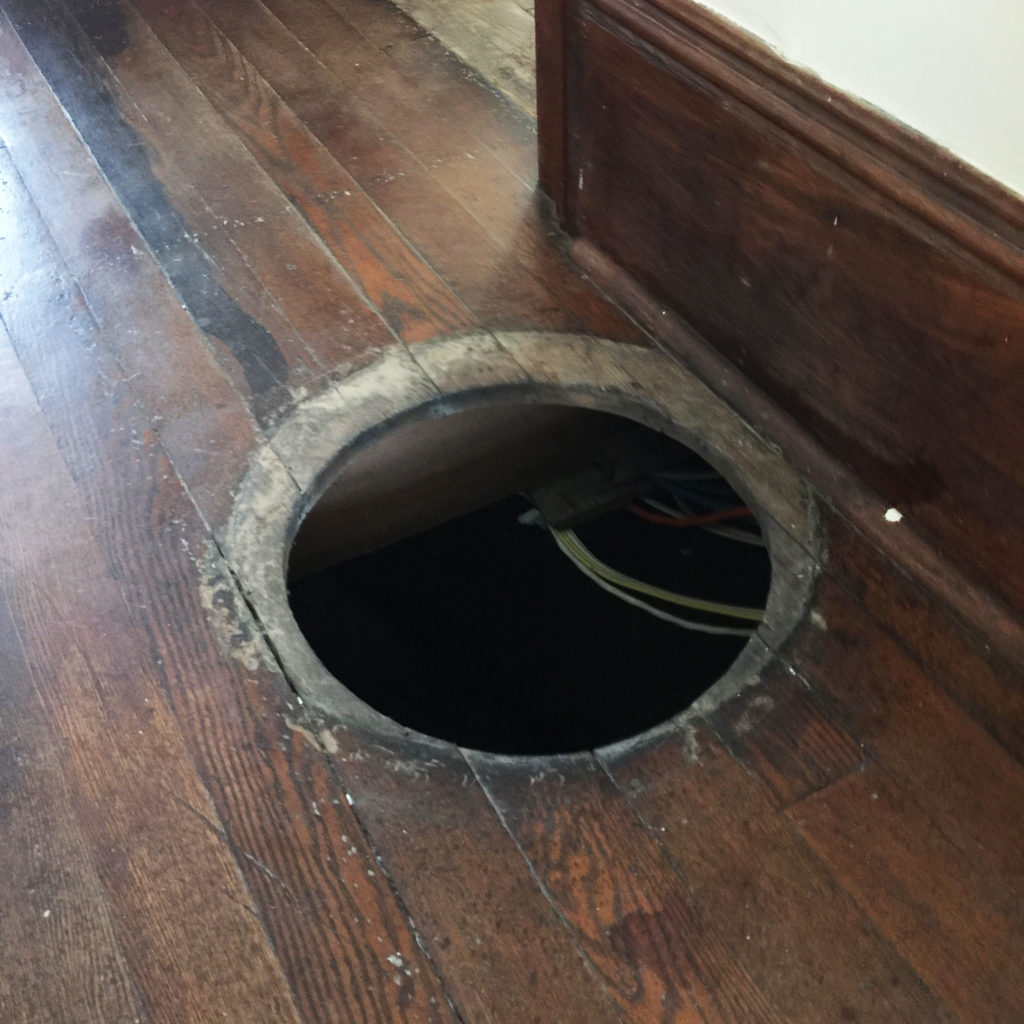 A quick examination of the ungrounded outlets revealed the electrical work needed a huge overhaul. And although it was early spring by this time, the place was as cold as a barn. The realtor confirmed that the house had probably never been insulated.

It was daunting. I mean, I was daunted.

The house satisfied something vital in me. For one thing, it was like something out of an LM Montgomery novel, which in itself was enough to attract me. The windows were large and bright, and each one provided a view of the water. And trees… in a house like this, I could finally have my fill of trees. My favourite feature was the screened-in porch at the side of the house, from which I could instantly see myself reading books and gazing out at the mill, listening to birds and the rustling of leaves, and that amazing little waterfall. The house and its surroundings were truly one. 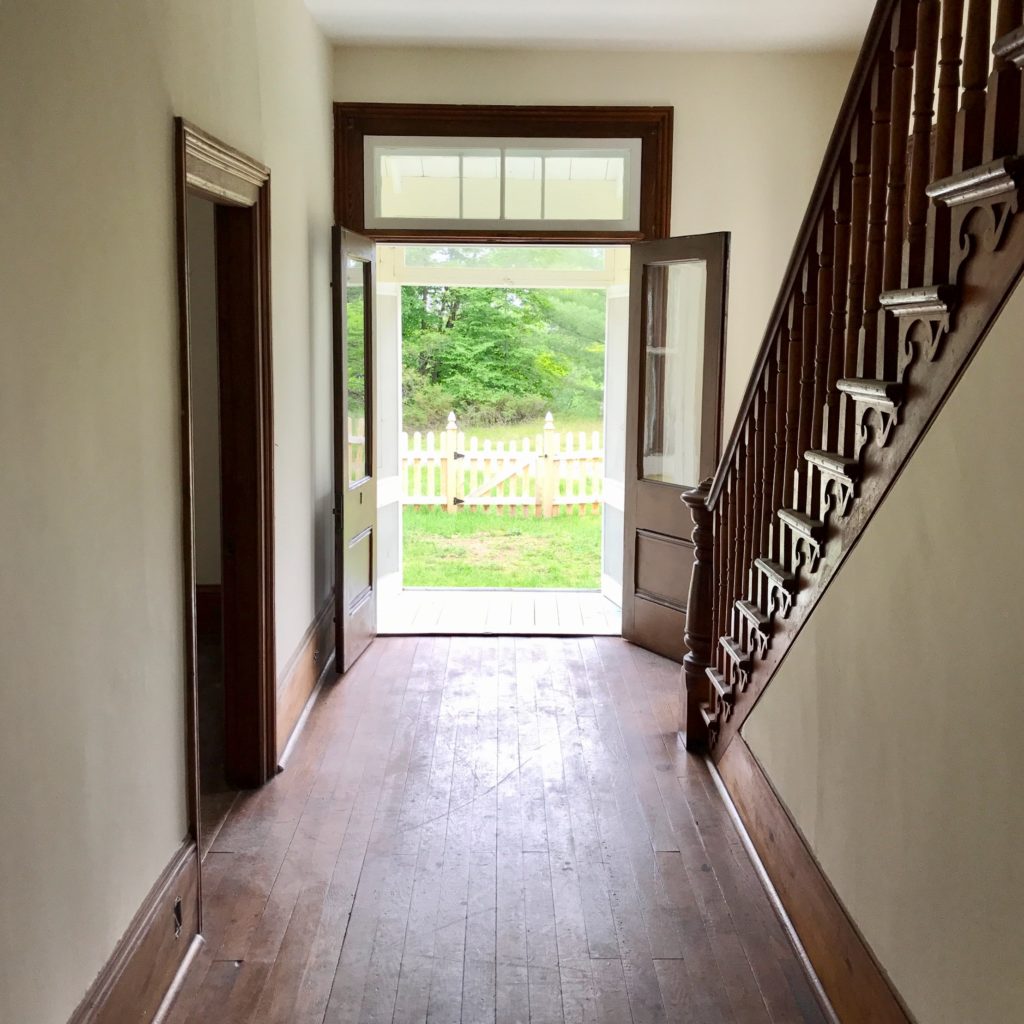 My spirits fell, however. I knew it wasn’t going to happen. Trevor & I are not DIY people, nor did we have an unlimited budget to take on so many renovations and repairs. The house still needed too much work; it was rough and isolated and so fucking beautiful, and it was positively crying out for someone (me!) to love it. I thought my heart would break right there. Before leaving the property, I rang the bell again and said good-bye forever.

I went home and told Trevor all about it, and prepared to let it go. The universe had other plans.