By March of 2017, we had officially purchased Tett House, although there were a number of things that still needed to be ironed out. Aside from our immediate families, and one or two close friends, we told no one. Finances still needed to be confirmed, our current home needed to be sold, employment would have to be addressed. And there was still a chance everything could fall spectacularly apart. It had all happened so fast, and we decided there were too many uncertainties to share the news just yet. 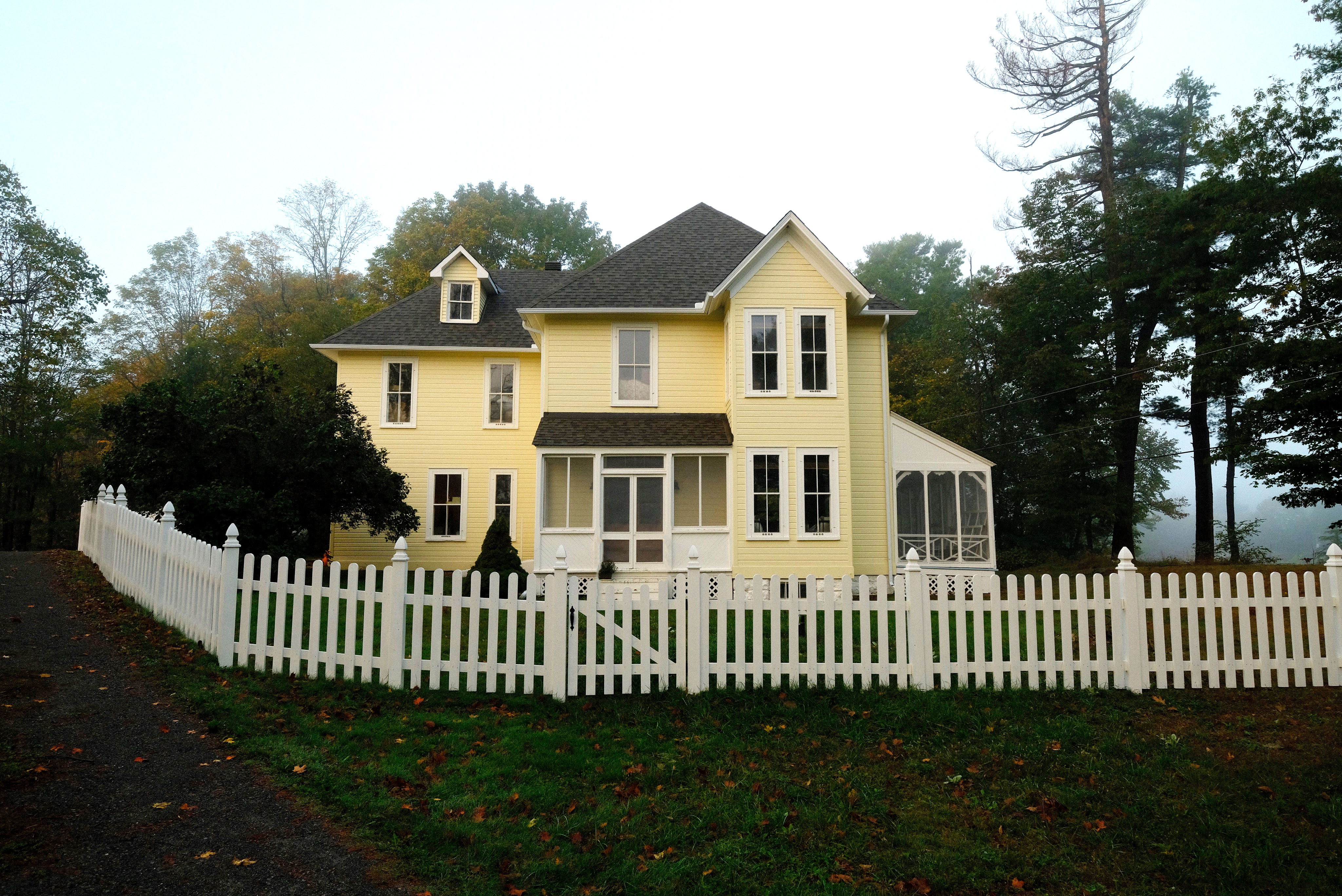 Tett House was closing in May, so we needed to list our current home ASAP. Selling a house in the GTA is no small undertaking. The stakes are really high and so is the pressure to have your home looking like something from HGTV. I wish I was exaggerating.

Before we could even consider putting the house on the market, we needed to do some basic, but long-overdue renovations in a very short period of time. We also had a large basement that had accumulated a lot of STUFF over time, and desperately needed to purge. Tett House had very little storage. Anything that wasn’t necessary or used on a regular basis would have to go. 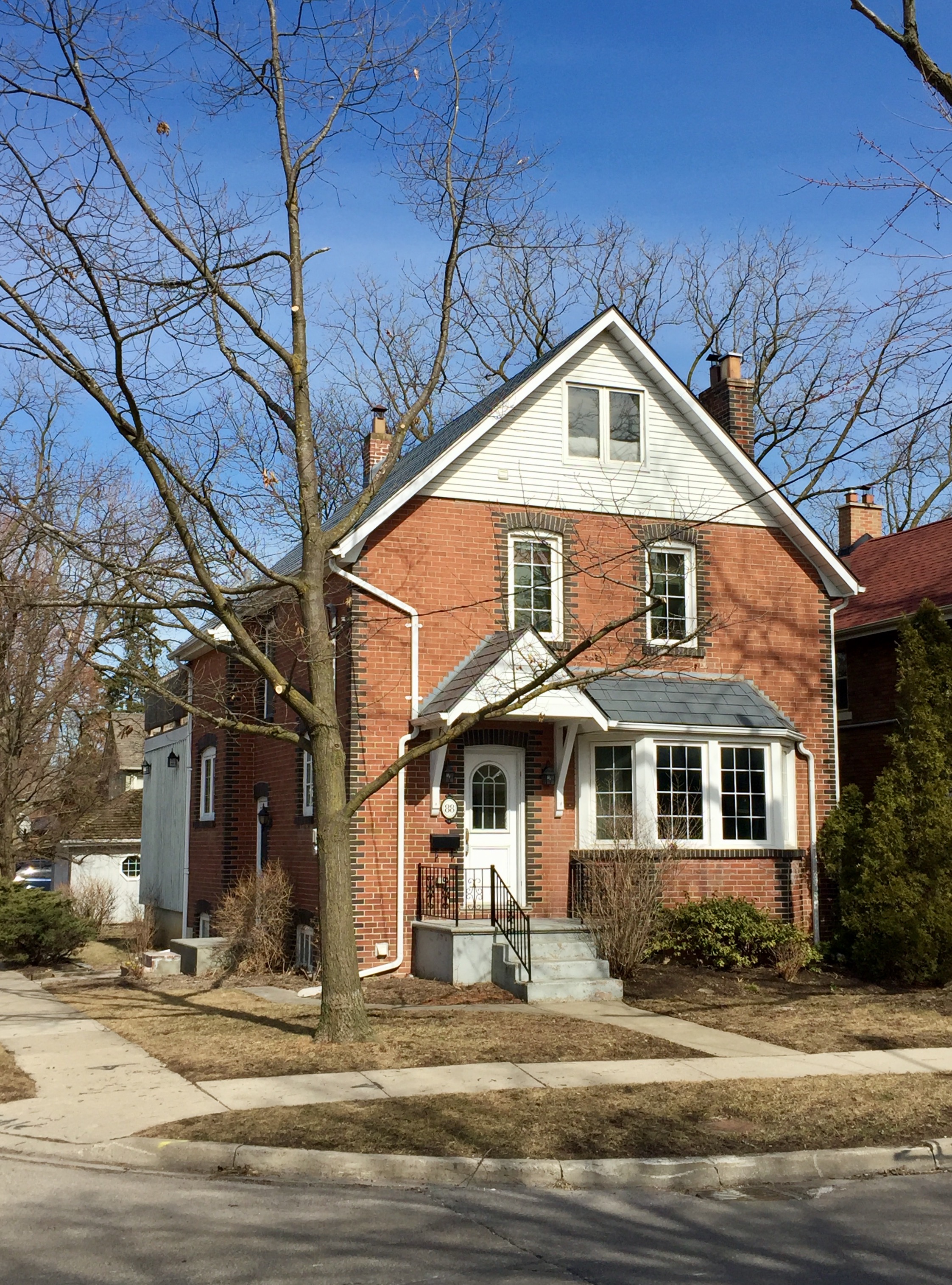 We had loved and enjoyed our home very much, but there were a few areas that  badly needed updating. We had approximately a month to accomplish the following:

4) Completely purge the basement, pare down furnishings, clean and stage the house

We were lucky to find a friendly contractor who came to our rescue and to whom I will always be indebted for his advice and good nature. A close friend of ours is a professional painter (Holla – Andrew Sharpe!) and he also jumped right in to generously help us prepare our home within such a tight time frame.

The work started in the kitchen. Our contractor ripped out the kitschy ’80s backsplash and replaced it with marble “brick” tile… 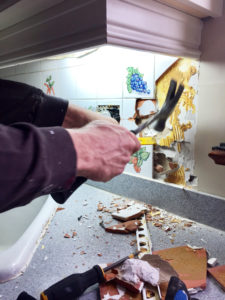 … taking us from this: 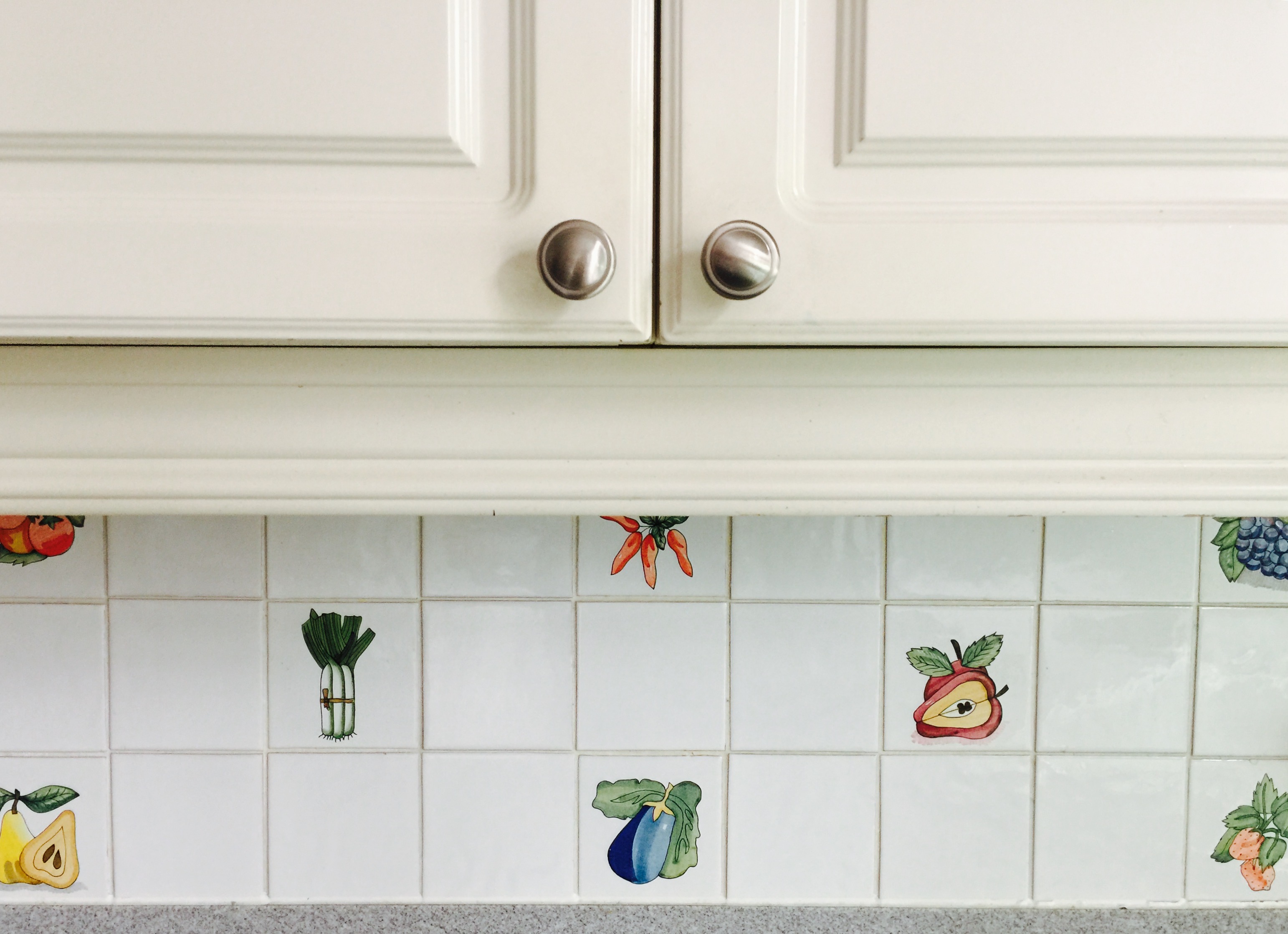 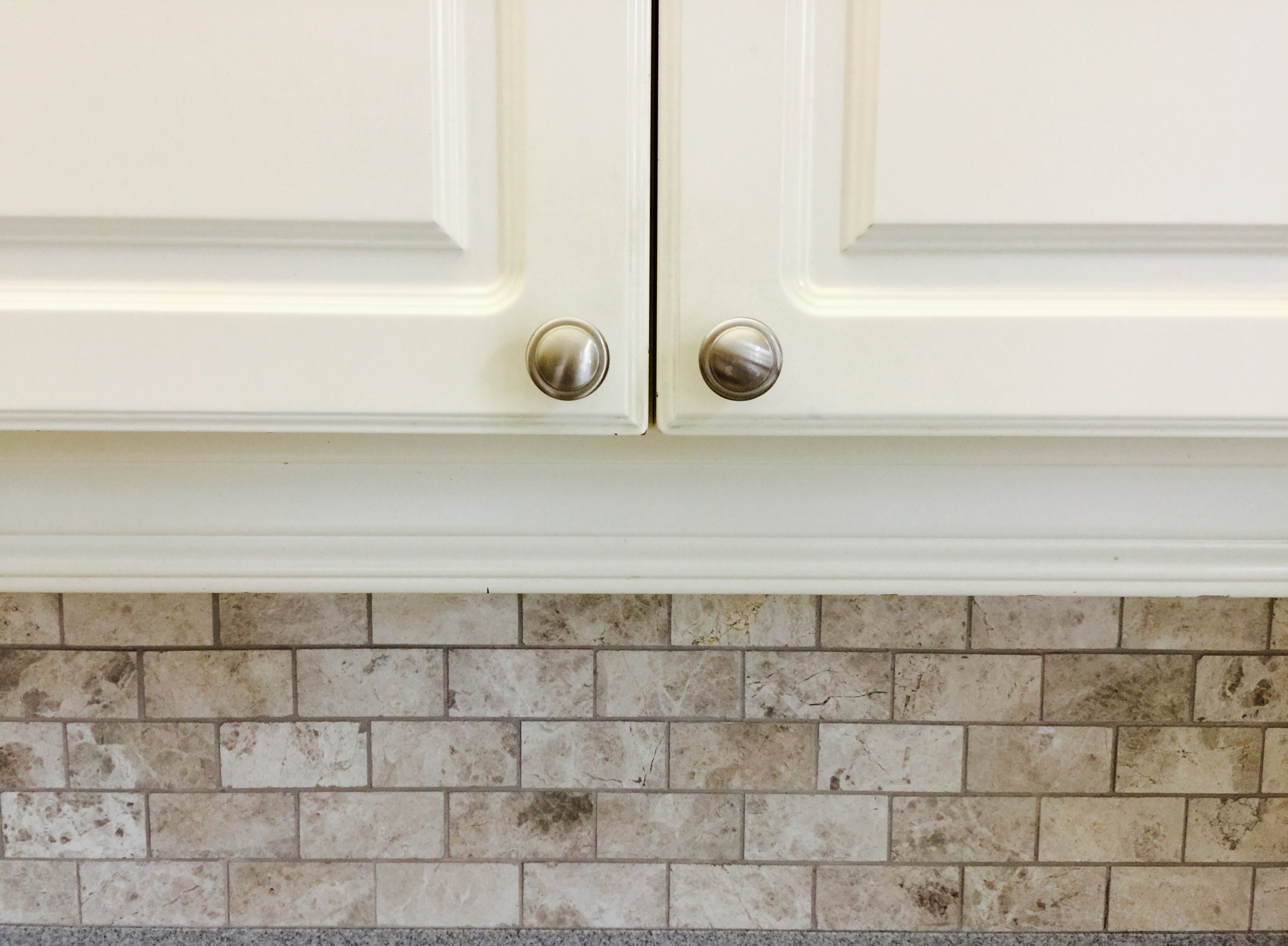 Even though our renovations were fairly simple ones, it was difficult not having a space to cook or gather or eat in. We became regulars at drive-thrus and local restaurants for several weeks while our kitchen was either shrink-wrapped or looked like a dumpster-dive: 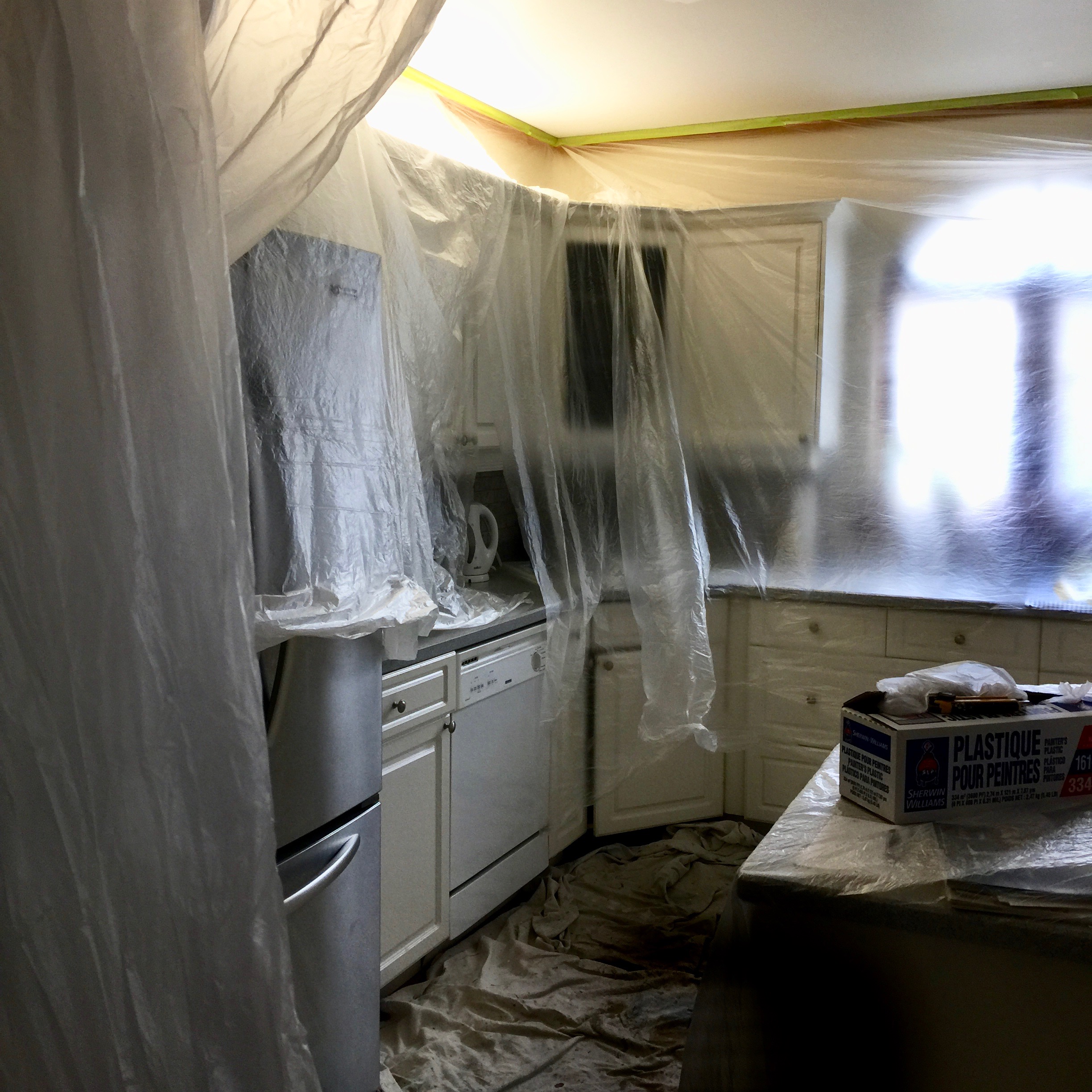 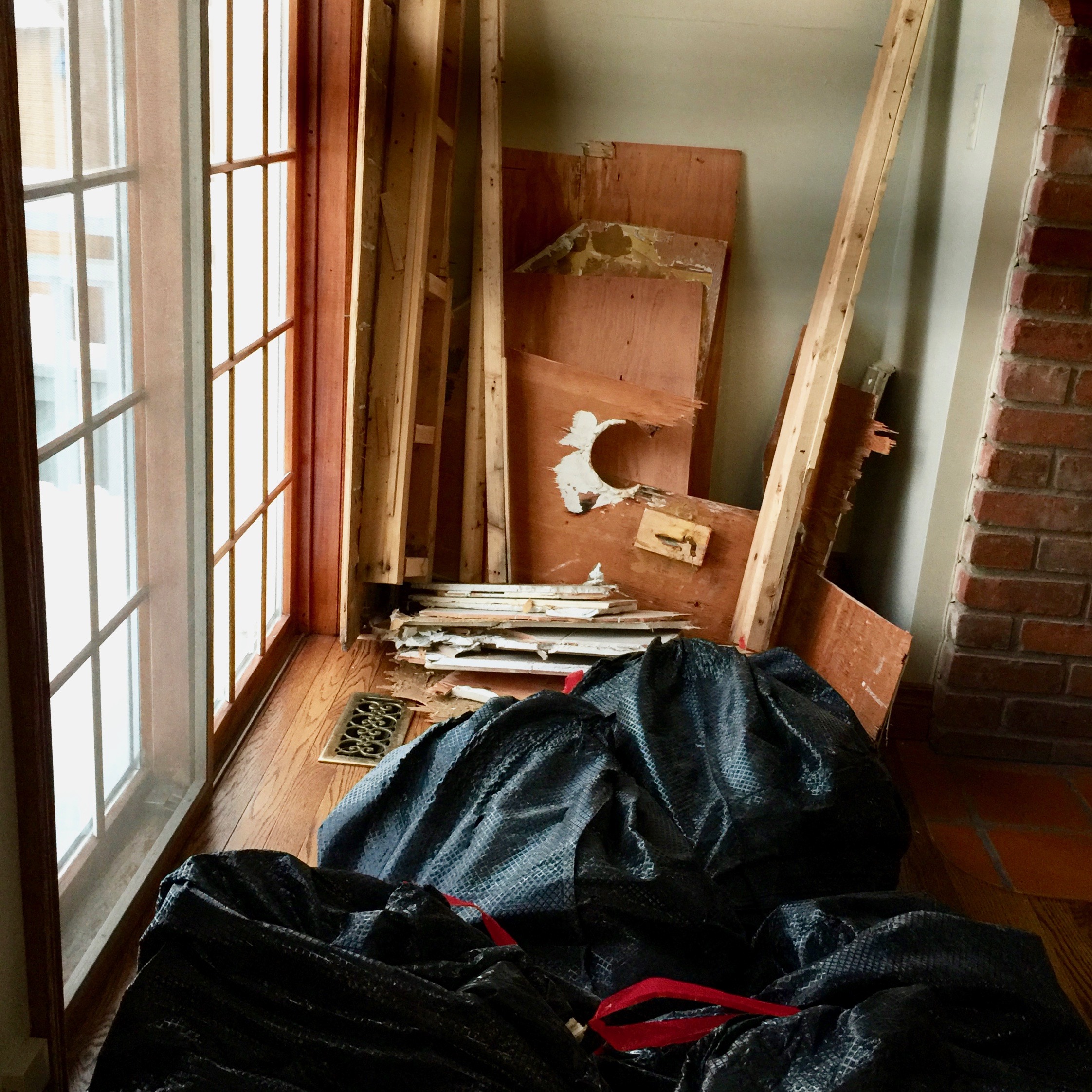 What can I say? We got used to making toast in the powder room. 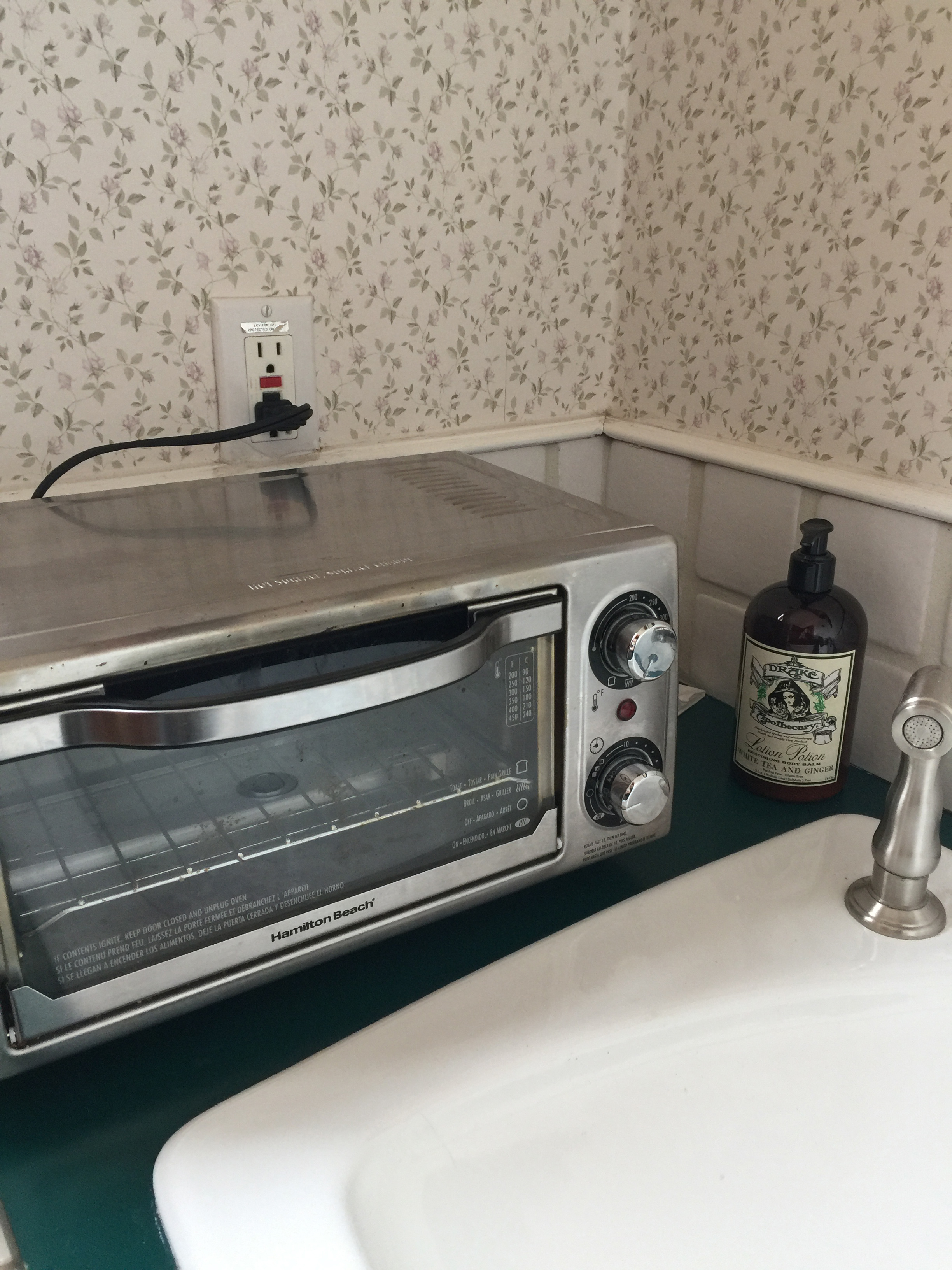 Meanwhile, a separate contractor started ripping out our side steps and walkway to build new ones. 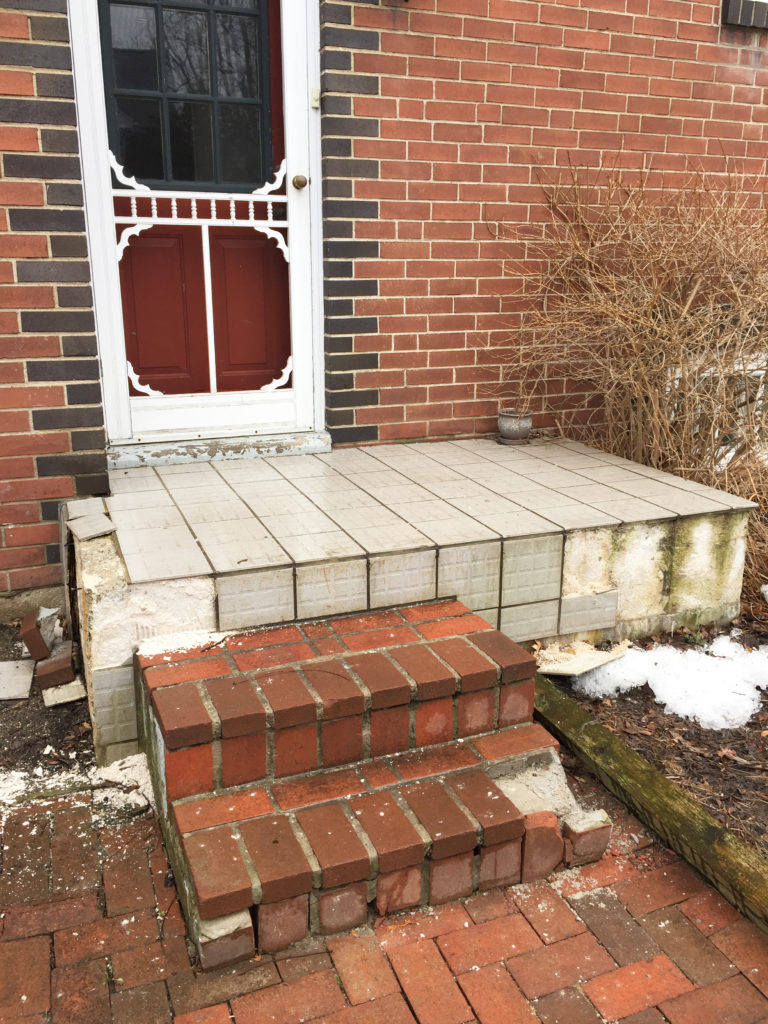 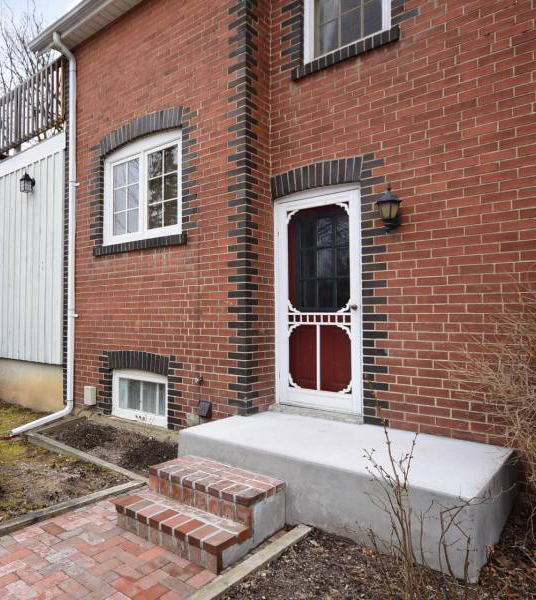 Before the kitchen was completely finished, work started on our main upstairs bathroom.

Since we were partially re-constructing and fully re-tiling our only bathtub and shower, we mentally prepared to be a bit stinky for a few days. These are the sacrifices you make when renovating, am I right?

I wish I had photos of what that bathroom looked like when we first moved in. Or maybe I don’t, because it was pretty bad. It had super ugly honey-oak cabinetry and PEACH walls. The tiles were a corresponding pale peach with flowered accents, and an ’80s step-up tub. I called it my “Golden Girls” washroom, only without Dorothy, Blanche, Rose, and Sophia, it was a real dud. Early on, Trevor & I had painted the cupboards and trim white, and the walls a pewter grey (this was before the grey trend and everyone thought I was crazy.) It worked to update the space somewhat, but we’d never had the chance to replace the worn out tile, with its stained and crumbling old grout.

The tub/shower also had awkward and unsafe recessed glass shelving that I was eager to get rid of. I re-designed the surround to accommodate a single full-length ledge with new waterproof lighting. Not being a fan of large wall tiles, I chose fresh, white beveled subway tile in a slightly elongated size.

Over the course of about 10 days, our Golden Girls grotto went from gross: 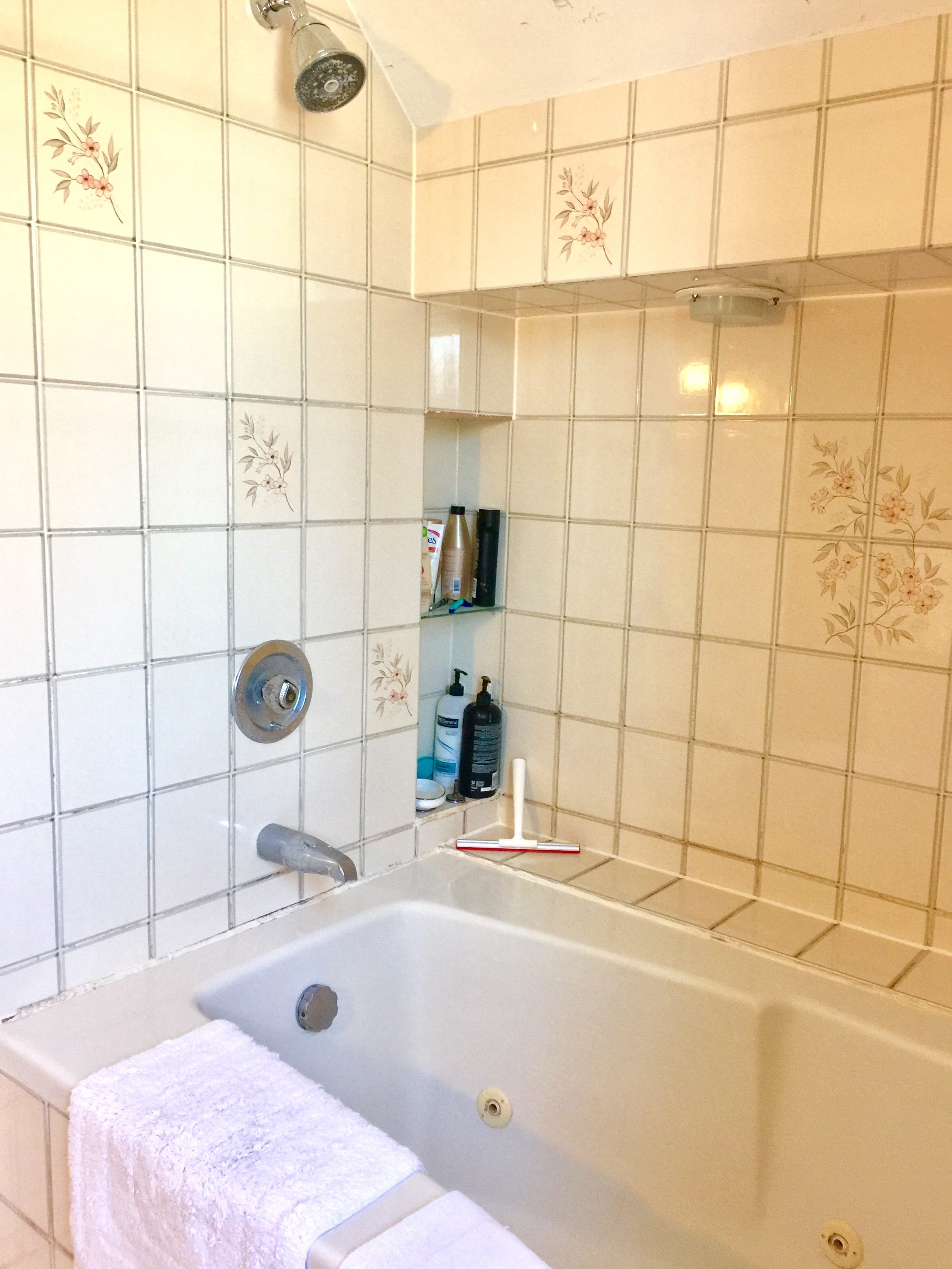 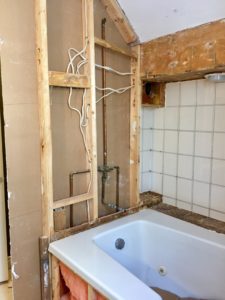 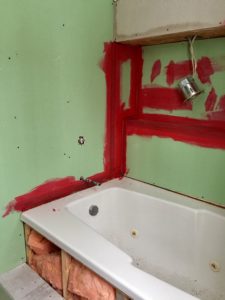 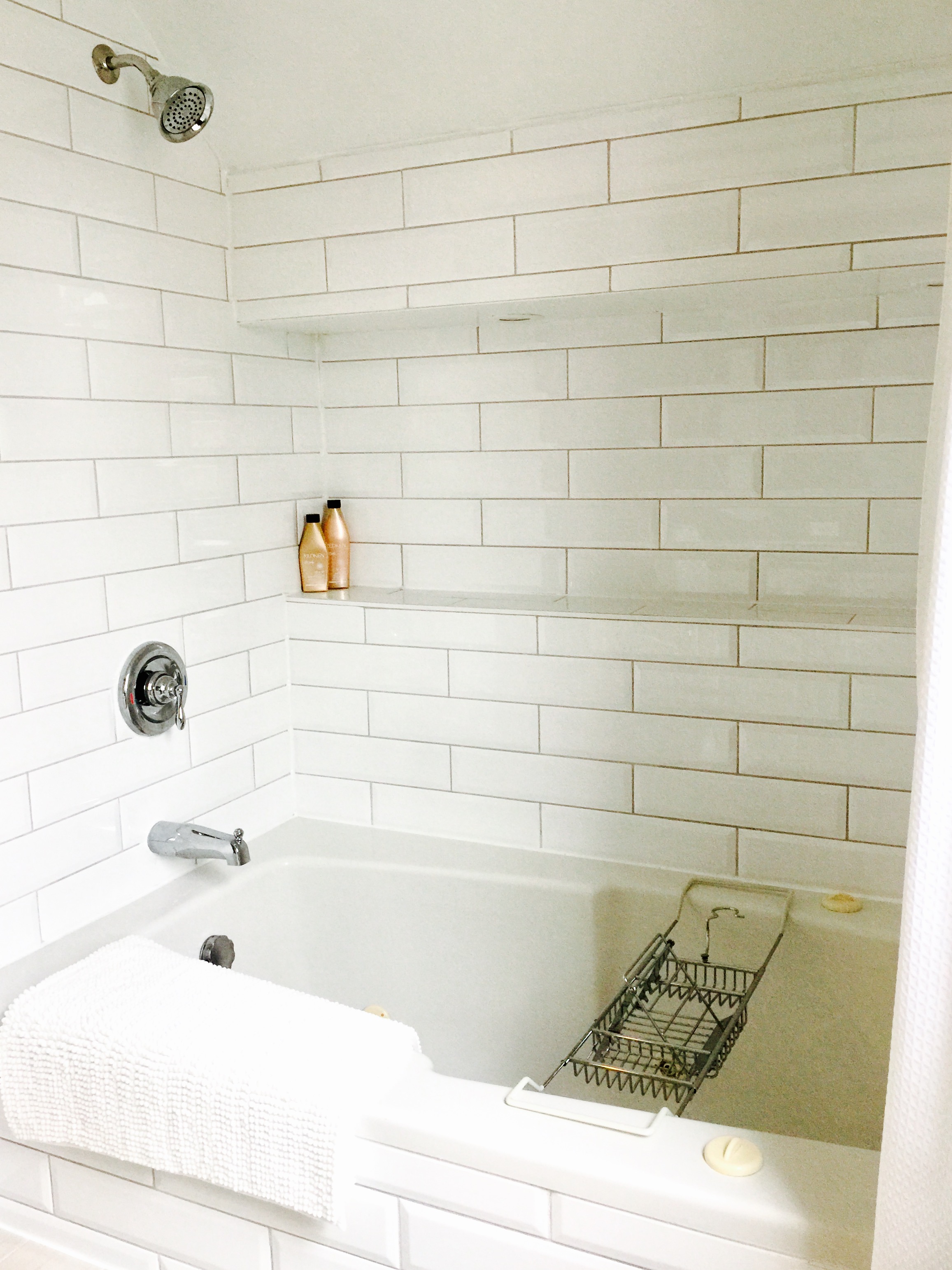 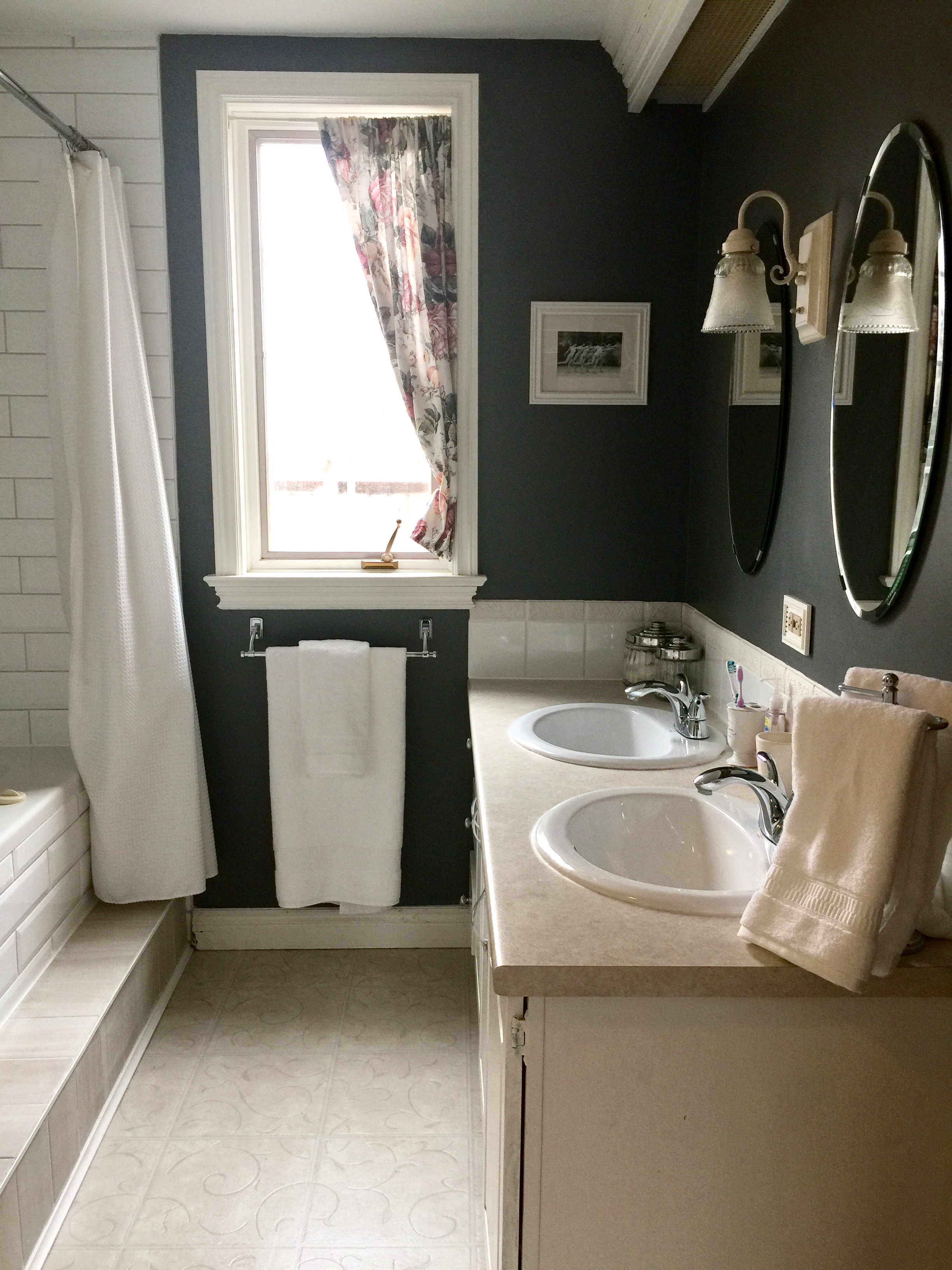 Of course we had the work inspected by only the finest of professionals. 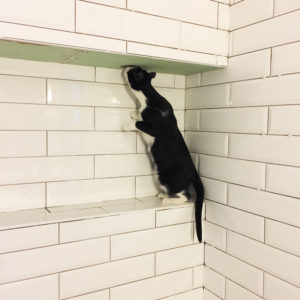 While the dust was still settling, Trevor & I ruthlessly purged our belongings. We were  ashamed and alarmed by the useless amount of stuff we’d been holding onto that was just taking up space. All in all, we threw away 49 bags of garbage, 46 bags of recycling, sold Oliver’s old baby gear, donated almost 20 bags/boxes of clothes and toys, and then held a yard sale.

Oliver sold lemonade and and iced tea and cookies and his old toys. He turned a tidy profit, and then gave a bunch of it to charity. 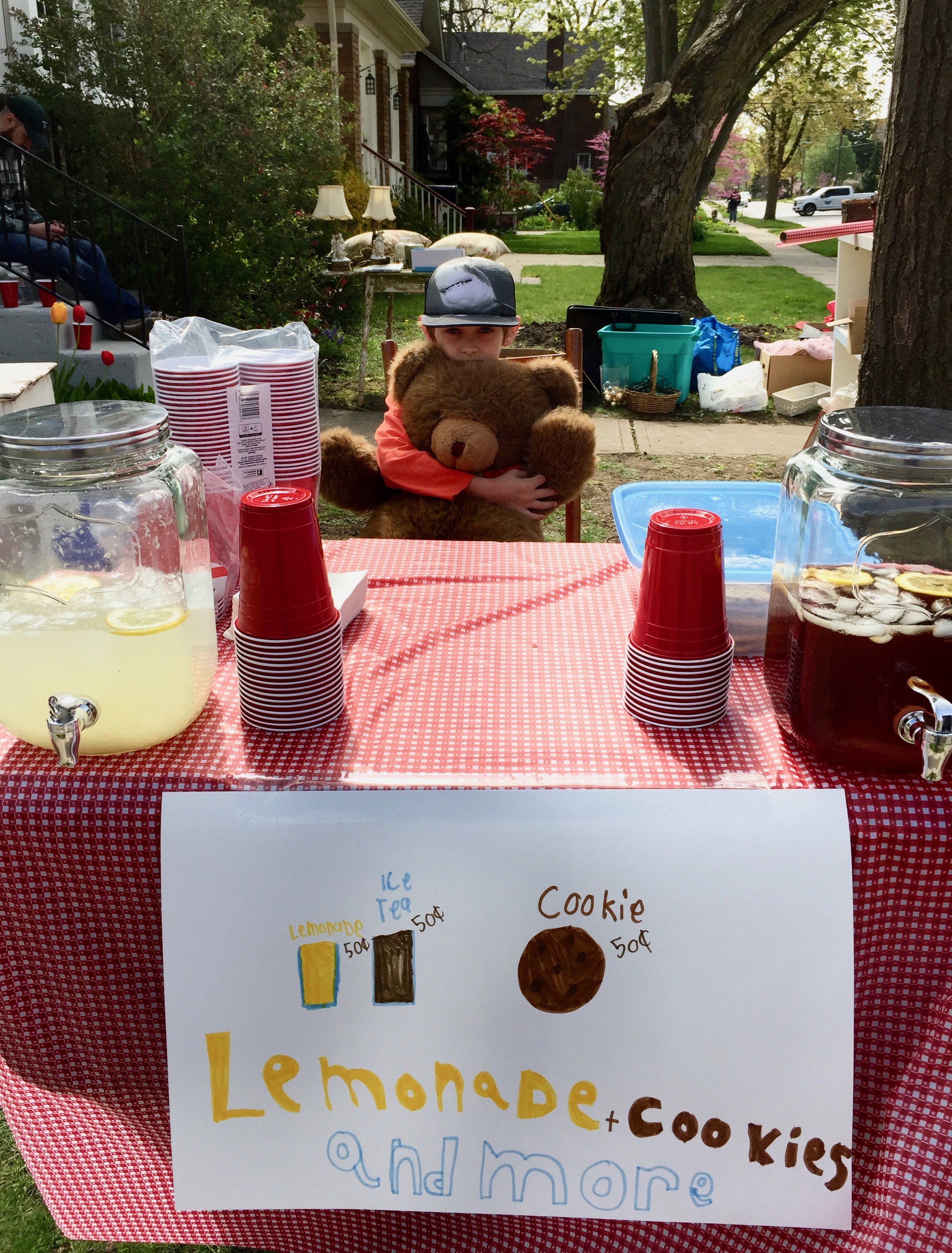 In the middle of our massive purge, I met with a cleaning woman to help us prepare our house for staging. She was an older, no-nonsense Polish lady who let me know she was coming over to see exactly what she was getting into. The renovations had just been finished and the house was at its worst… full of drywall dust and tile dust, and strewn with boxes. I will never forget her expression of horror.

She clearly didn’t think we’d have the place ready in time for her to come back and clean. We were down to the 11th hour before the house had to be listed.  The real estate market had heated up to a fever pitch, and we had to act fast. I assured her we would be organized and ready, and practically begged her on bended knee to take the job. Finally, reluctantly, she agreed. If I’d have had time to breathe a sigh of relief, I would have.

A few days later, when she returned to clean, she was astounded. Trevor & I had worked day and night until all final traces of chaos and renovations were gone.  “You’ve been vorking very hart,” she told me admiringly, and I felt truly vindicated. There is no higher compliment than an Eastern European woman saying you’re a hard worker, believe me. We’d always flattered ourselves that our home usually looked pretty attractive (when it wasn’t a construction zone.) But by the time she worked her magic, it was positively sparkling. 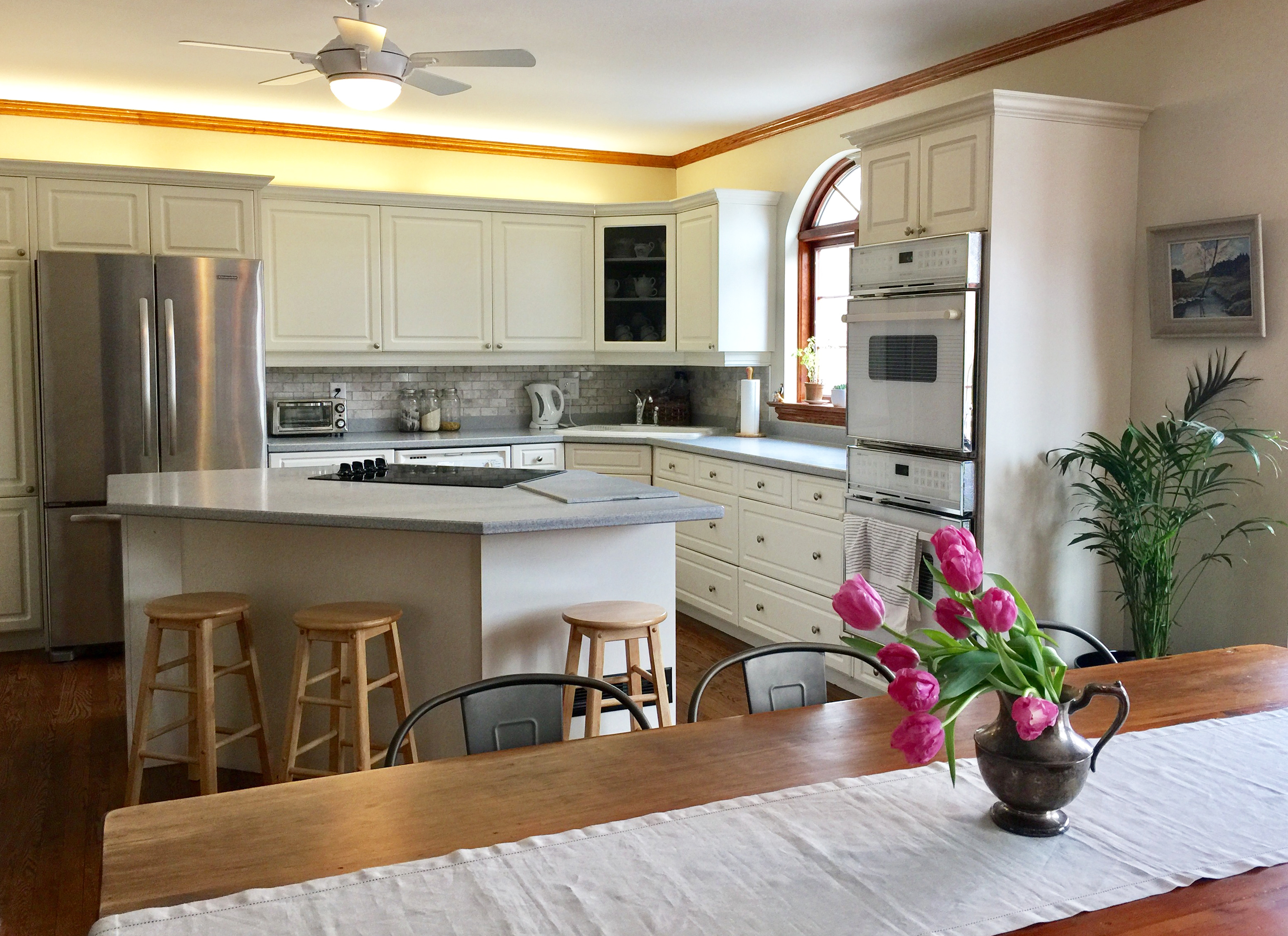 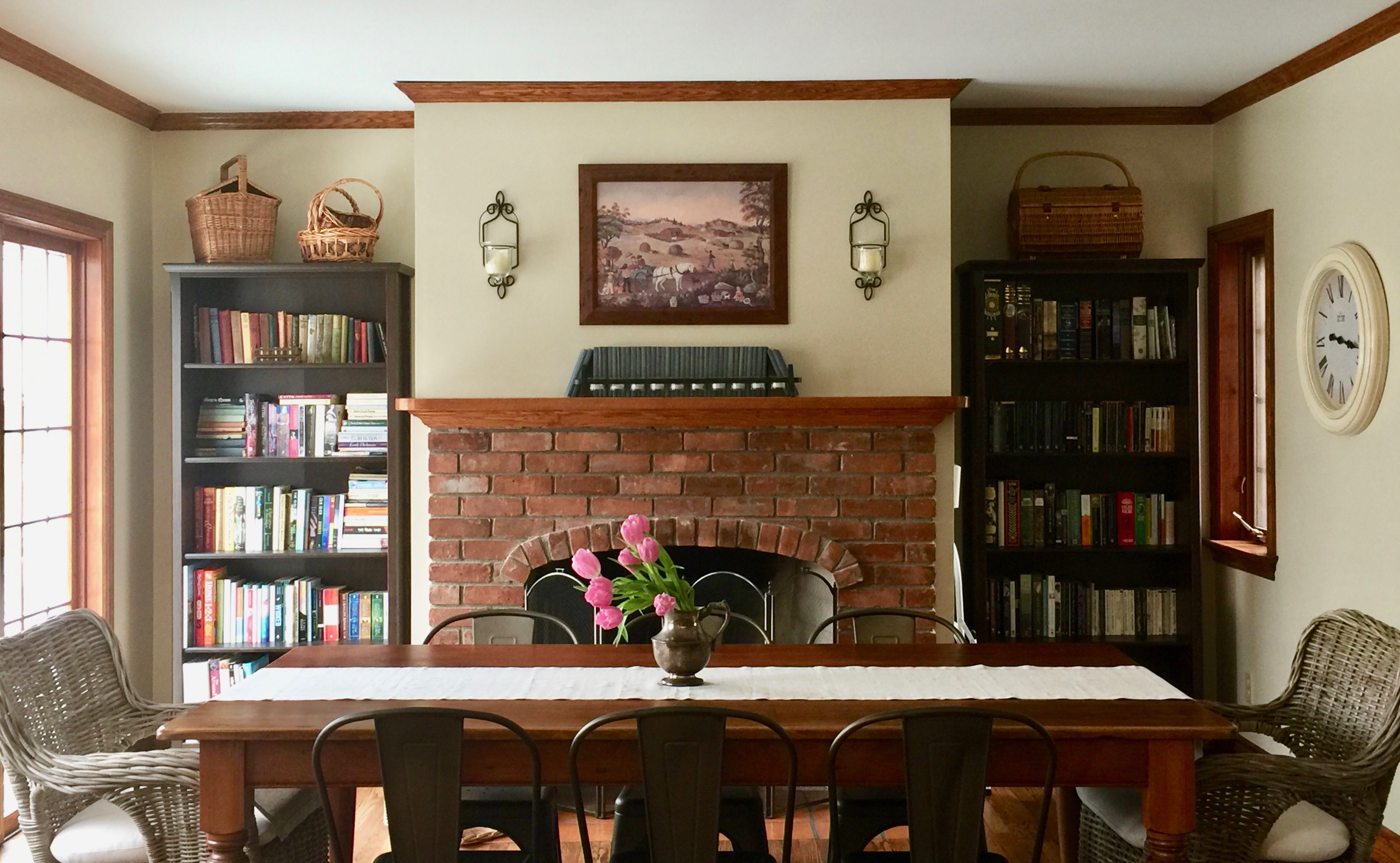 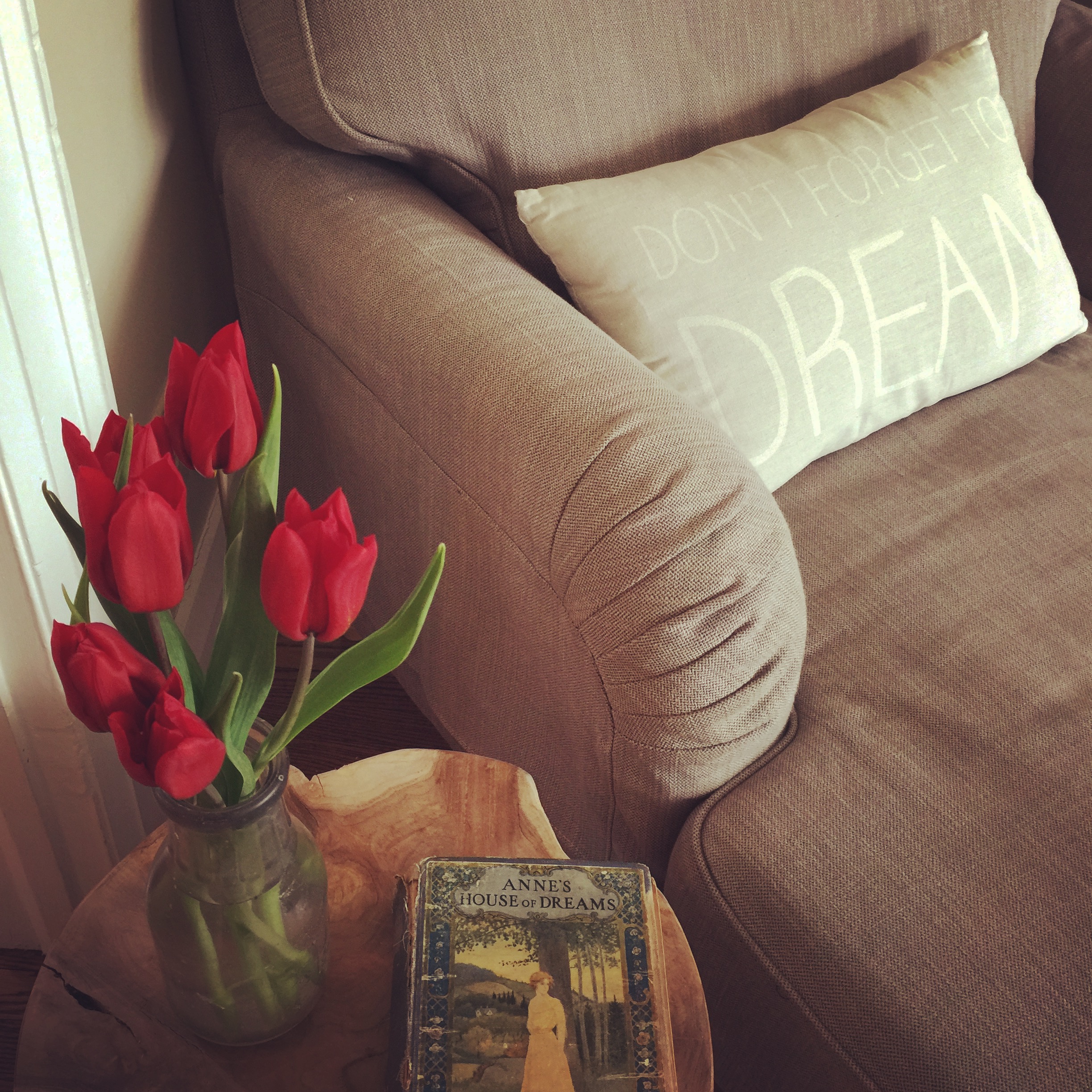 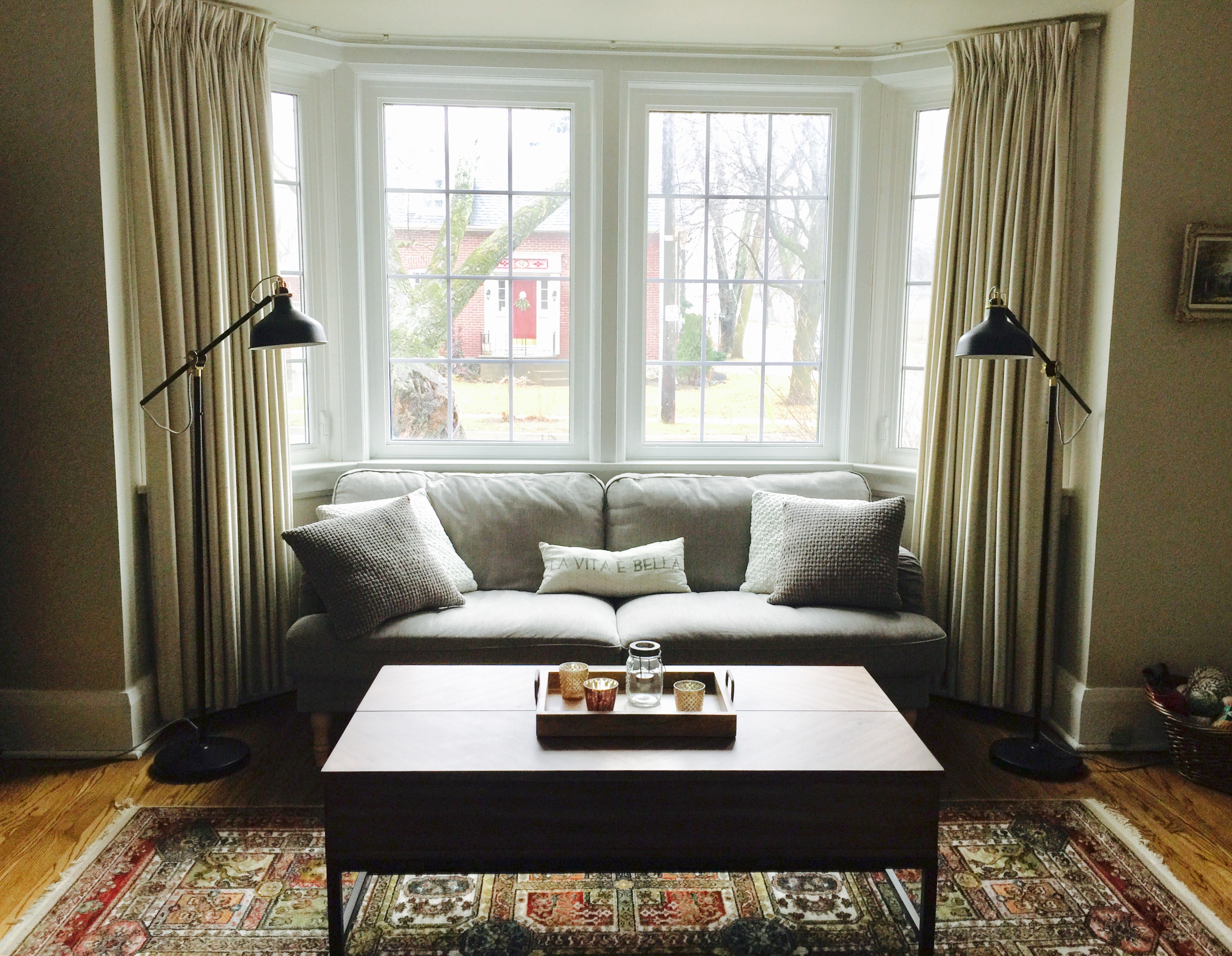 It was all worth it. Somehow, almost overnight, it had become a seller’s market, and houses around us were being snapped up for $100,000 – $150,000 over asking price. Ours was ready to be listed, and our agent already had a potential buyer in her pocket. We were proud and anxious and terrified and excited.