Disclaimer:  This is not a fun post. It’s long, probably convoluted, and I’m afraid there aren’t many pictures, but I promise you, our story starts to get better after this.  It’s a hugely important part of the Tett House narrative, and it has to be told, so bear with me.

The day we got the key to Tett House (see Part 8) we discovered our well had been vandalized and contaminated with diesel.

We didn’t know all the details right away, and had to go through many channels before we had all the answers, but it was ultimately confirmed by each professional we consulted. Shortly before we moved in, someone poured a jerry can of diesel down the well.

What a housewarming gift. I would have infinitely preferred brownies baked by a new neighbour. Except we really didn’t have any neighbours. Trevor, Oliver & I were spending our first weekend in our new house in a new community, but we were in trouble and we knew no one. We couldn’t drink the water or brush our teeth with it. We couldn’t bathe in it. We weren’t sure if it was OK to flush the toilets, or even stay in the house. Joey, our new plumber and electrician, was the only person we could think of to call, as he had accompanied us on our last visit to the home two weeks before. 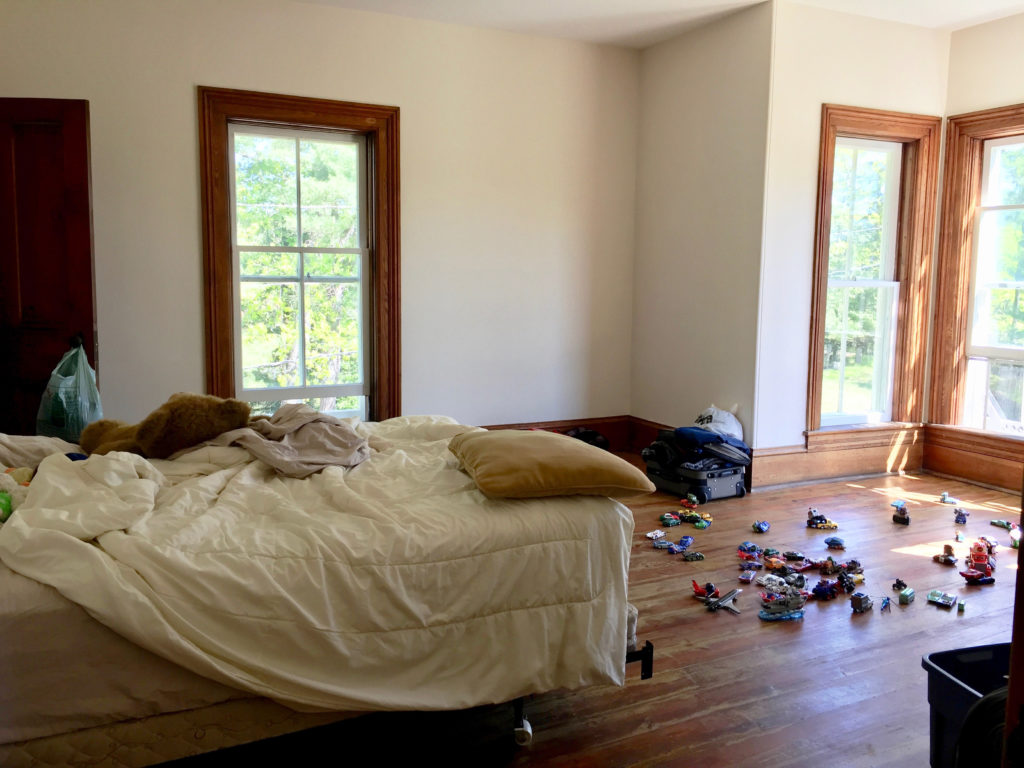 Our first morning at Tett House.

Joey stopped in as a favour on a Saturday night after having ice cream in town with his family. To say we were grateful is a radical understatement. He ran the water in the kitchen and could smell what we all thought was gasoline right away. He said immediately, “This wasn’t like this two weeks ago.”

He used a portable meter to test the water for hydrocarbons, confirmed a positive reading, and expressed his concern that someone had vandalized the well on purpose. He told us we needed to have the water specially tested by a laboratory and then contact the Ministry of the Environment for further instructions. He also advised us to call our lawyer. At the time, we couldn’t tell for sure if someone had poisoned our well or we had unknowingly bought a contaminated property. We soon found that neither scenario was going to be easy or cheap to address.

Trevor and I felt like we were in the middle of a nightmare. It was the May 24 long weekend, and we had to find somewhere to stay, but all the local hotels were booked up. We also had 4 different sets of contractors ready to start work after the holiday, and five major appliances scheduled for delivery over the next two weeks.

Everyone and everything had to be put on hold. Our whole world seemed to grind to a halt, and yet it was also spinning out of control so quickly, it was making us sick.

Well. We are now in the unenviable position of being able to tell you exactly what to do when someone vandalizes your well. Yay, us!

First, we had to call some of my relatives, who lived an hour away, and ask them to take us in for the weekend. It was midnight by the time we got there, tired and stressed.

We had to take samples of the water to a lab in Ottawa and pay for a special and expensive test that isolates hydrocarbons. It took several days, but came back positive for high levels of diesel.

We contacted the Ministry of the Environment, who advised us to hire an environmental consultant, and told us to report to our local health unit.

We found an amazing consultant who guided us every step of the way. She was incredibly sensitive to our situation, as well as very knowledgable and professional. She told us the first thing we had to do was identify whether the diesel was in the water due to a contaminated aquifer (underground) or whether it was, in fact, an act of vandalism.

We had to hire a company of well technicians to pump the well dry, remove and clean the pump, scrub the well-casing, and properly dispose of the polluted water. After this, the fresh water coming in from underground had to be immediately tested. If it was clean, the contamination wasn’t environmental. But, if it tested positive for diesel as well, then we’d be looking at a bigger problem. Then, a series of test drills would have to be made in all directions (at our expense) until the source of contamination was found, which could run up into the hundreds of thousands of dollars and effectively bankrupt us.

It was a terrifying prospect. It took several weeks to get the work initiated and undertaken, which felt like years, as we endured sleepless night after sleepless night, and days of lengthy phone calls and consultations. Trevor stayed back at our house in the GTA, working and taking Oliver to school, while I made the 3.5 hour drive back and forth to Tett House 2 – 3 times a week. 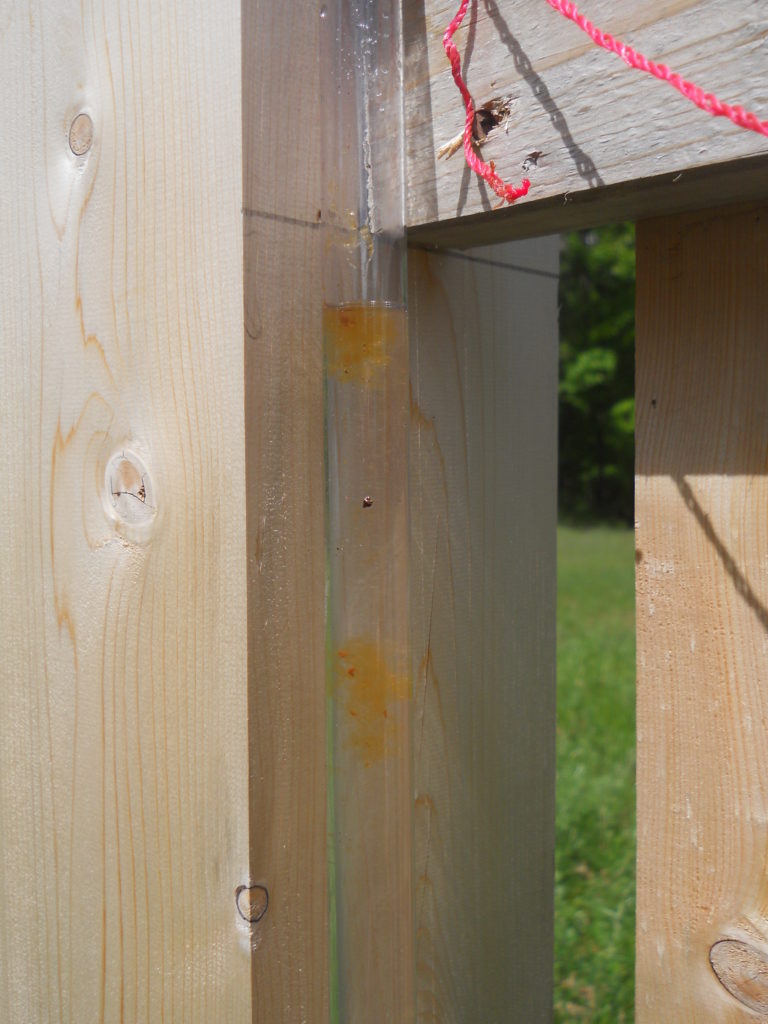 Fortunately, the aquifers were found to be clean and the underground water fresh. The diesel had all been floating at the top of the well, and it was a clear case of vandalism. However, hydrocarbons had gotten into the cracks and fissures of the well casing and continued to leach into the water. At these low levels, the water was no longer an environmental problem, but it still wasn’t safe for human use or consumption. We found ourselves with a well that was still out of commission, but unable to dig a new well, in case of cross-contamination. Our environmental consultant told us it could take as long as five years for the well water to “rehabilitate,” if it ever did.

IF IT EVER DID.

Needless to say, we did not have five years. Our other house was closing in about 10 days, and at this point, none of the renovations we’d scheduled at Tett House had been completed.

So… what do you do when you no longer have a viable water source in your new home? You call Joey at McNichols Electrical & Plumbing again, of course.

Oh, but before that, you call your local OPP and file a criminal report. Poisoning someone’s well is a serious charge, although we had no expectation of ever finding out who did it. We did discover, however, that the previous homeowners had either cheated or pissed off a substantial number of people long before we’d had the (mis)fortune of dealing with them. Someone had obviously decided to get their personal revenge, not realizing an entirely new family was moving into the house. The officer we spoke with called it “Lanark County Justice,” and then apologized for this being our first experience in the community.

Since Tett House is surrounded by a pond on one side and a lake on the other, Joey set us up with a lake water system and new filtration unit. This could be a temporary or a permanent solution, depending on how clean the well water would be in a few years. Because the house is atop a cliff, it involved running 350 feet of heated line uphill from the pond to the house. Good times. 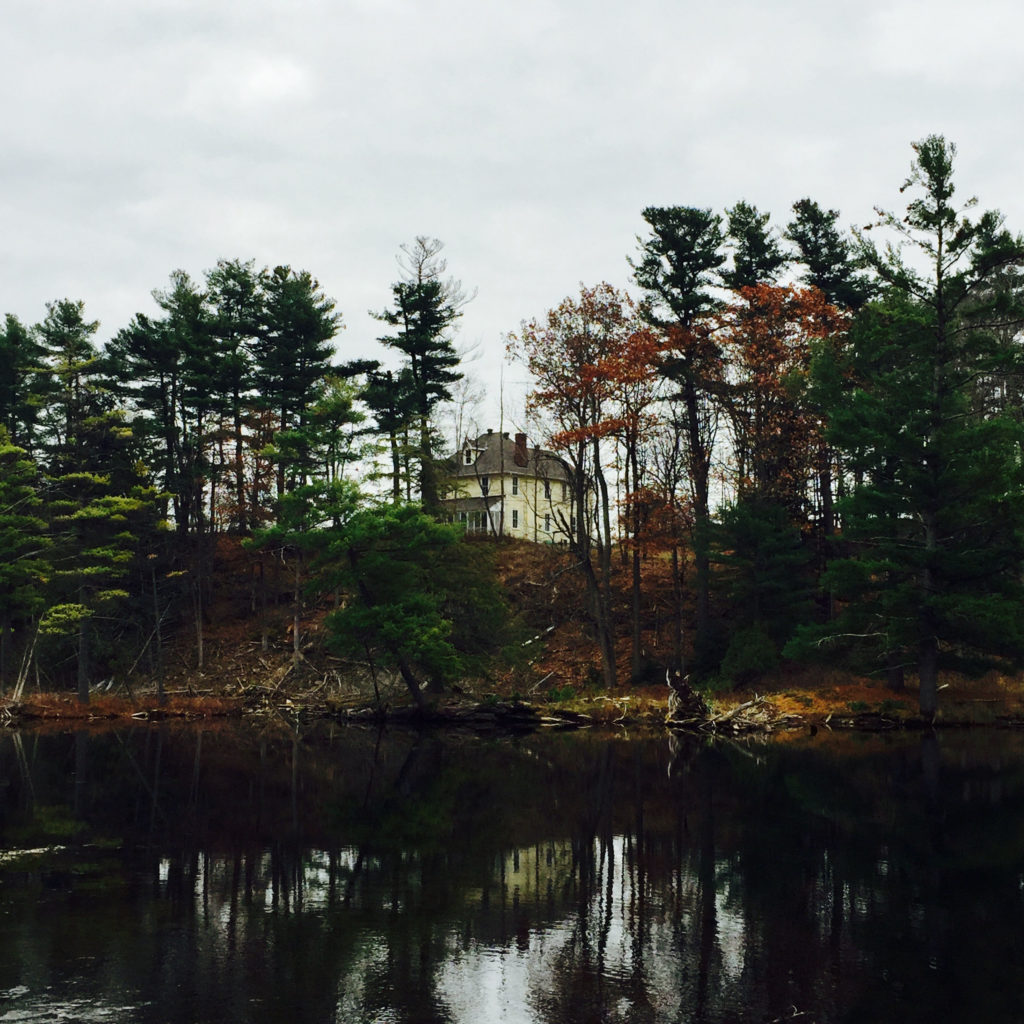 The next step in this complicated process (feeling overwhelmed yet?) was “shocking” and flushing out all the pipes in the house. This was a huge undertaking and one that carried no guarantee of success. If any diesel remained, the entire plumbing system would need to be replaced. Meanwhile, any water-yielding appliances in the house (hot water tank, etc.) had to be removed because of the contamination.

Now, I know you’re thinking, “Could this story get any more tedious and complicated?”  Well, in fact, it CAN. As with swimming pools, “shocking” the plumbing is a process that normally involves disinfecting with chlorine. But, as it turns out, diesel and chlorine are combustible, so this was not a method that was open to us. Our environmental consultant had to do more research to find a less hazardous, environmentally-friendly, cleaning material.

We were lucky. Shocking the plumbing worked. The new lake water system and its filtration equipment worked. We added a reverse osmosis filter in the kitchen, just for good measure. Our final step was to have the water lab-tested for everything from e.coli to benzene. And diesel, of course, and every flavour of hydrocarbon in between. Everything came back completely safe and “non-detect” for any contamination. We got the results exactly two months from the day we first got the key to the house. The water from our tap was cold and crisp and clear and tasted like a benediction. I wept. I think I had aged 10 years in 8 weeks.

Oh, and there’s one last, very important thing I can tell you about what happens when you buy a new house and find out someone vandalized the well just before you moved in… Legally, there’s not a damn thing you can do about it. You’re financially on the hook for everything. And if you’re eligible to make an insurance claim, it’s a very tiny drop in a very large bucket.

This was our introduction to our new life at Tett House. 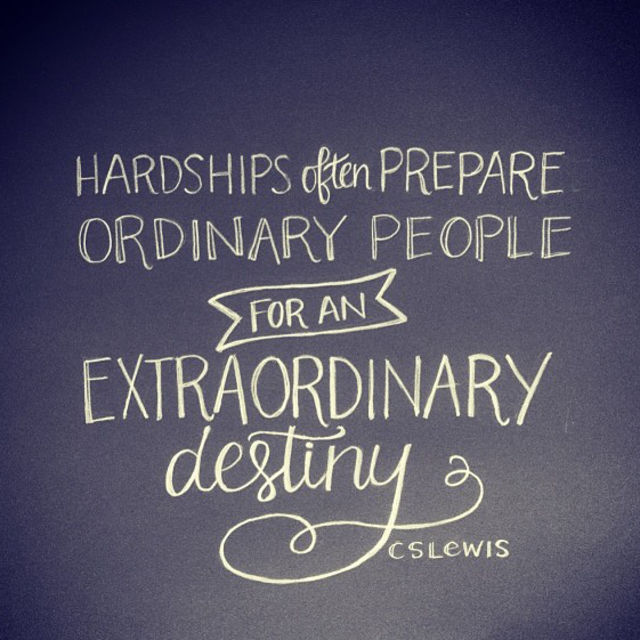 (To start our story at the beginning, click here for Part 1.)